The CEO of 3A Producciones and creator of FADJA, José Aníbal Aguirre, explains in this exclusive interview the reasons for the concept change of the new GAT Expo Gaming and Technology, the migration from the traditional venue of Bogotá to Cartagena de Indias for the 2020 edition of the Colombian trade show, and the alliance with Totally Gaming to offer courses. 'If the gaming sector is legalized, a great fair in Brazil would be the next step of that giant,' says Aguirre. 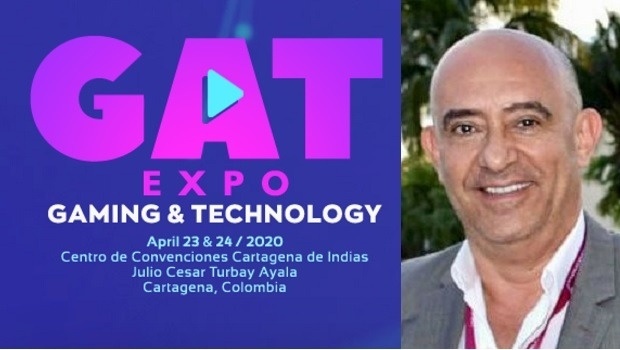 GMB - FADJA changes its name to GAT EXPO. What are the reasons for this move and what does it represent?
Aníbal Aguirre - GAT is the acronym for Gaming and Technology. We had been working with the FADJA concept for 21 years: American Fair of Games of Chance. We decided that it was the right time to refresh the brand and give the news a complete turnaround, including technology as a fundamental element of the show. Also, GAT EXPO allows us to grow in terms of constituency, projecting from the regional to the global.

What are the dates for GAT EXPO Gaming & Technology and what new proposals will it present?
GAT EXPO will be held for two days as has been traditional; On this occasion, the dates are April 23 and 24, 2020. The novelty is that, in addition to the exhibition, we will hold the Gaming Week for the first time since April 21, beginning with the Totally Gaming Academy professional training courses. The Colombian Poker Tour, the holding of general assemblies of the most important unions in the sector in Colombia, and the first edition of the GAT Awards aimed at the Ibero-American industry, are other innovative contents. As entertainment, we will have a mixed martial arts match with the support of LFC and Brave Combat Federation. In addition, complementary networking events in a literally magical scenario.

In addition to the name, does the venue of the Colombian show fair also change?
Yes, we will be returning next year to our place of origin. FADJA was born in Cartagena de Indias in 1999 and we will return in 2020 with GAT EXPO. The fair will take place at the Cartagena de Indias Convention Center (https://cccartagena.com), in the so-called Heroic City. The environment that Cartagena offers is unmatched. Between 2017 and 2018, the growth of the meetings industry in the city was 21.25%, which consolidates it as a destination for meetings and congresses, occupying the first place in Colombia and the fifth in Latin America, according to Global Meetings Forecast of Amex 2019. The Convention Center has optimal infrastructure for this type of meetings and with all the necessary facilities for our exhibitors to exceed their expectations. In addition, the eventual decentralization of the capital of the Republic is good and offers the opportunity to meet and participate in an event of this category, in another city of the country as friendly as Cartagena.

Have you also signed an alliance with Totally Gaming? What does this agreement include?
We are very pleased to be able to offer Totally Gaming Academy training courses at our event. Thanks to this alliance with Clarion Gaming, we will have the most renowned academy available to all Latin American entrepreneurs, who will be able to access their classes during the development of the Gaming Week in 2020. The courses are in the process of being defined. People are eager to know the topics and participate in the workshops, applying new knowledge to their own management models. This is a great strength of our 2020 fair.

As a specialist in the field, how do you analyze Brazil's moment in relation to the gaming sector? Can you imagine that Brazil can have another big Latin American fair in the future?
We see that Brazil continues to advance. We hope that before the end of the year, Congress will process the Bill that allows the legalization of all games of chance in that country, promoted by Deputy Cardoso Junior. We believe that gaming is an activity that occurs naturally in society, and that the State must be guarantor of certain minimum standards for the benefit of all involved: businessmen, players and even the same State, taking the reins through of the regulation that it imposes. As things go, the time is near when the Brazilian industry can repower and consolidate that great market. President Bolsonaro has repeatedly expressed his support for the incorporation of this sector into the formal economy of the country. If this happens, a great fair would be that giant's next step.