After years of strongly opposing, in a column this Sunday not signed by a specific journalist but expressing the opinion of the media, Folha turned its position and said that “with good and rigorous regulation, a broader gambling legalization besides casino opening can be allowed for the country to enjoy the bonuses of the activity.” Last year, O Globo, the other giant media group in Brazil, also changed its mind and started to boost the opening of the activity. 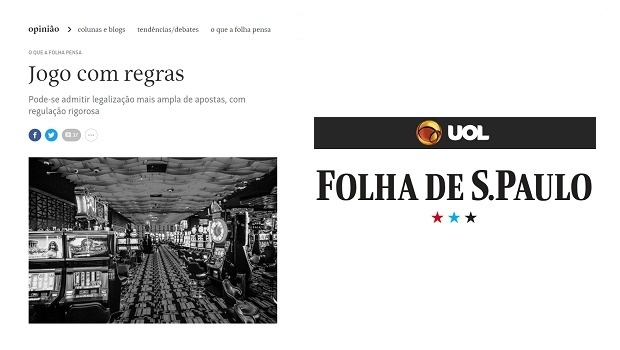 Next, the full text of the journal opinion column:

Social problems associated with casinos and other forms of gambling abound, and compulsive gambling is by far the most serious of them. Gamblers' mental imbalances and their constant flirting with economic and family ruin are immortalized in the pages of Fyodor Dostoevsky's "The Gambler."

Reviews of studies conducted mainly in North America, Europe and Asia indicate that between 0.7% and 6.5% of individuals have lived at least one episode in which they could be classified as pathological gamblers.

The disorder, which tends to be chronic and progressive, often appears with other psychiatric disorders, such as alcoholism, depression, and even suicidal ideations.

As if that were not enough, the granting of licenses to exploit the activity by individuals is often accompanied by the flourishing of criminal acts such as money laundering and drug and human trafficking.

For these reasons, Folha was opposed in its editorials to the recurring attempts to expand the opportunities for legalized gambling in Brazil. But there are also arguments to the contrary.

Technological developments that allow anyone to install a virtual casino on their computer, and the growing conviction that individual rights should not be hindered by the State, make the newspaper change its position now — and allow for broader legalization, heavily taxed and well regulated.

In fact, the proliferation of gambling through the internet makes Brazilian citizens expose themselves to the risks of ludopathy, but destines abroad all business revenues and also taxes that could help reduce their deleterious impacts.

Good regulation is the key for the country to take advantage of the activity's bonuses without embittering its worst costs. You should not, for example, put a slot machine on every corner. Casino openings should be limited to a few places that are designed to attract visitors.

Rio de Janeiro’s Mayor, Marcelo Crivella (PRB), already supports a plan to set up a casino on the city's port zone. Indeed, the venture has the potential to create jobs and stimulate the tourism industry, but the capital numbers mentioned by the legalization lobby need to be viewed with a good deal of skepticism.

The serious social problems linked to gambling cannot be eliminated, but they can be alleviated - for example, with the increased provision of medical services for addicts and self-financing mechanisms whereby the compulsive gambler, in a moment of lucidity, vetoes his own entry into the betting place.

Regarding money laundering, there is technology for authorities to track online casino movements. The activity must be surrounded by total transparency, with accounting open to the public.

The player must be clear that his chances of winning are minimal. It will be up to him, alerted, to decide whether or not to transfer income to casinos and to the state.