On Wednesday this week (6th), the 1st Bahian Forum of Sports Law about Management and Social Responsibility in Sport, promoted by the Bahia Institute of Sports Law, jointly with the Commissions of Sports and Sports Law and the OAB/BA, took place at the Baiana Law School. Esporte Clube Vitória was present to debate on topics that are on the rise, such as the company-clubs and sports betting, among others. 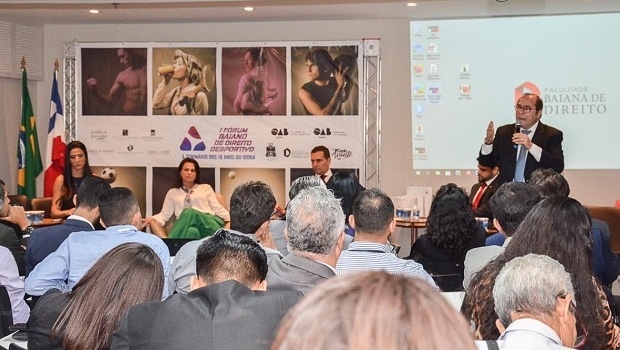 The 1st Bahian Forum of Sports Law on Management and Social Responsibility in Sport, that took place on Wednesday this week (6th), was attended by Esporte Clube Vitória, represented by ECV's legal director, Dilson Pereira Júnior, and lawyers Manoel Machado and Breno Contreiras, who attended the event last year.

Issues such as Sports Management in Practice: Company-Club and Sports Employment Contract, and Future of Professional Sports: Sports Betting, Financial Fair Play and Complaince are under discussion in the House and could not be set aside during the Forum. In the first panel participated Cristiano Possídio (BA), Marcelo Santana (BA) and Valton Pessoa (BA) as speakers, and Cascio Cardoso (BA) as mediator. In the second, the speakers were Milton Jordão (BA), Fabiano Vasconcelos (BA), Roberta Foppel (BA) and Gustavo Nadalin (PR), and Ayana Simões (BA) as the mediator.

Other topics discussed at the event were Management and Social Responsibility in Sport, Labor Market for the Lawyer in the field of Sports Law, Constitution and Sports Law, Homophobia and its repercussion on Sport, Sports Incentive Legislation: An Opportunity for Clubs, Freedom of Expression, Racism, and Sexism and Transgender in Sport.

The president of OAB-BA, Fabrício Castro, congratulated those involved in the organization and stressed that the forum was of great importance for the promotion of the specialty in Bahia. "Sports law has grown a lot in recent times, including the problems we have in the labor court, and this has been a field sought by many lawyers," he said.

One of the speakers of the event, the president of Esporte Clube Bahia, Guilherme Belintani, rated the initiative of OAB-BA as very important. "Although Sports Law is a classic area of law, it has been growing more and more, and Bahia has been playing an important role in that," he said.

During the event, it was launched the book “Labor Sports Law - Special Contract of Sporting Work” by Bahian lawyer Cristiano Possídio. The event was attended by guests from the states of Paraná, Goiás, Rio de Janeiro, Sao Paulo and Santa Catarina.