The legalization of sports betting in Brazil is already an issue of national interest. This is demonstrated by the space dedicated to it by 'O Estado de S. Paulo', one of the main newspapers in the country with an extensive report published this Sunday, analyzing the figures that the new market handles, sponsorships, control and global context with interviews to the professor of the FGV, Pedro Trengrouse and Ricardo Magri, director of Integral Sportradar, among others. 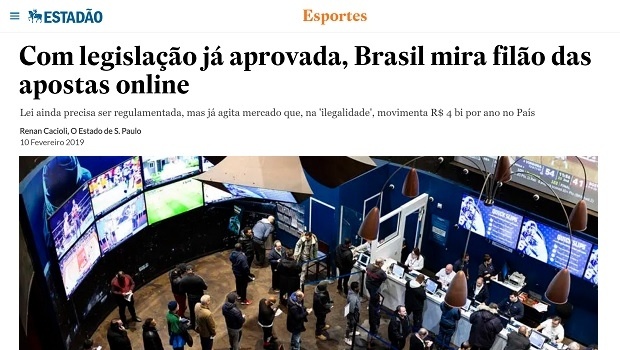 In December, the Michel Temer government promulgated Law 13,756 / 2018, which made licit throughout the national territory the activity of sports betting of fixed quotas, those in which it is defined, at the time of the bet, how much to win in case of a hit . The intention is to grab a share of the market that already moves in Brazil about R$ 4 billion (US$ 1.1b) per year, according to a study by FGV (Fundação Getúlio Vargas), acting in the "illegality" in the country.

“The eight thousand sports betting sites that exist in the world are within the reach of Brazilians, of which 500 offer games of Brazilian football, and 50 have versions in Portuguese," said Pedro Trengrouse, a lawyer and professor at FGV, responsible for the proposal on the topic sent to the National Congress that eventually became law.

As these sites are based in foreign countries, they can offer betting options in games of the most varied types, including competitions in Brazil. The user opens an account on the site and chooses how much to invest, either via ticket payment or bank transfer. After payment, the credit will be used for betting.

Under the law, the government hopes to attract the operators, which may be physical spaces or websites, a way frequently used by Brazilians. The text provides for two years, extendable by two more, for the Ministry of Economy to regulate the activity. The Ministry will grant the licenses through a fee payment.

That is, in practice, companies can not yet operate in Brazil. "The activity is no longer a criminal offense, but it will only work from a public concession. The Union will grant the right of a company to function as a bookmaker," explains Luciano Andrade Pinheiro, a lawyer at Corrêa da Veiga Advogados, in sports law and intellectual property.

Many, however, already dribble the rules and create ways to get to the consumer, including via TV advertising. But instead of announcing bets, they talk about "hunches".

Legalization should also boost sponsorship in football, as is already seen on a large scale in England, for example. Fortaleza club was the first to partner with a branch website, NetBet, which stamped its brand on the teams’ shirt. "It's a traditional pay-per-advertising model," said Marcelo Paz, president of the club. "They are going to do some activations with the fan with a prize draw, but as far as the club is concerned, it's a shirt advertising model."

In the eyes of those who study the market, however, the interest of the company is more comprehensive. " "They are sponsoring because they are already creating in the public the strength of their brand. When it comes to regulation, which company are you going to look for? The one that opened today or the one that was already on the club shirt?," asks Pinheiro.

How does the audit of sports betting work?

"When the activity becomes legal, the concern with the result is a constant of the bookmaker, so it has to implement mechanisms to restrain the manipulation," says Pinheiro. Bookmakers usually hire companies that monitor suspicious transactions.

1. Many of the companies that operate betting are based in tax havens. How can the Brazilian government compete with these places and attract them?
Brazil has the potential to be one of the three largest sports betting markets in the world, alongside England and China. If the government creates adequate regulation, with no restriction on the number of licenses and in accordance with world best practices, the big international betting companies will come. The national market itself, once developed, will help the government fight against unlicensed operators.

2. What are the advantages for foreign companies to establish themselves in Brazil, since they will have to pay taxes that they do not pay today?
The possibility of advertising and sponsorship, having physical stores and also having local ways of payment, for example, will allow these companies then licensed to reach a much larger and more varied public than the current model of offshore operation.

3. What problems do you see in the text of the law that was passed last year?
There are points that can be improved, such as the taxation of prizes. It would be more interesting to increase the value of the tax on betting companies by keeping the bettor free of a tax charge.

Some local football championships already have their matches monitored

One of the ways of curbing the action of criminal networks exploiting manipulation of sporting results is by investing in betting monitoring. In Brazil, all matches of the four divisions of the Brazilian and Paulista Championship are in the sights of a company that specializes in detecting possible fraud. It was thanks to reports prepared by it and others of tthe sector and telephone clamps that the "Game Over Operation" started in 2016.

"The appetite for the manipulation of results comes with the size of the betting market to be offered," explains Ricardo Magri, integrity director of Sportradar, a company hired by the federations of Pernambuco, Santa Catarina and São Paulo, as well as CBF.

On the other hand, he does not believe that the legalization of sports betting in the country will increase the number of cases of attempted manipulation. "Brazil is already a pre-regulated country, that is, it is allowed, but it does not have the licenses yet. There are already a lot of bets in the country. This market is growing, but the phenomenon was already mature."

The fraud detection system works on two fronts. Through software that crosses various data, it is pointed out where there is an unusual pattern of betting. Immediately, this creates an alarm, but there is not necessarily any reason to suspect. This is where human analysis comes in. The company checks if there is any factor in the game that has triggered the volume off the betting curve.

When watching the English league, the supporter will hardly see a game in which at least one of the shirts has not stamped the brand of a betting site. It is because nine of the 20 clubs are sponsored by sports betting companies.

According to Felipe Maia, bets raised in the United Kingdom move around around R$ 10 billion (US$2.65b). He sees reasons for Brazilian clubs to get excited about the regulation of this new market. "Football, as it is the most popular sport in the country, will certainly benefit a lot. In addition to the destinations established by law, which can reach more than R$ 100 million (S$26.8m), there is an enormous potential for sponsorships for teams both the big and small ones," explains Maia.

In Law 13.756 / 218, there is already a forecast of the percentage of what will be collected with bets to be assigned to the clubs "that assign the rights to use their denominations, brands, emblems, hymns, symbols and the alike for dissemination and execution of the fixed-betting lottery ": 2% for physical bookmakers and 1% if they are online operators.

The text also stipulates that at least 80% of what is collected will be destined "for the payment of prizes and the collection of income tax on the prize money". Some analysts ponder the risk of overfilling the business model.

"This type of regulation in detail, in a commercial activity, seems to me incompatible. It is OK to establish rules of operation, but not how the company will manage what it collects," says lawyer Luciano Andrade Pinheiro.