Brazil is the third country in the world in the eSports ranking if the list is organized by the number of enthusiastic fans, those who always accompany matches, cheer for a team, buy shirts, go to face-to-face championships. This is one of the findings of the new eSports survey released by Newzoo this week. Brazil registers 20% growth on its eSports audience and reaches 21.2 million fans in 2019. 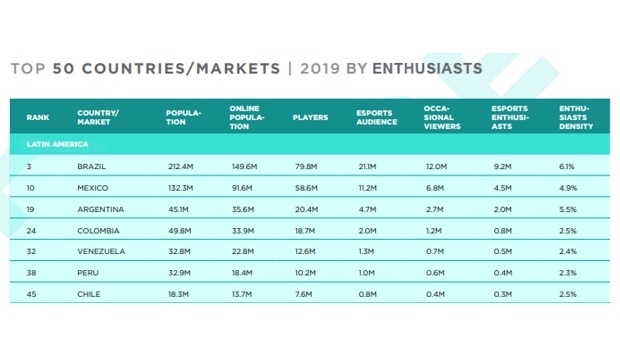 In fact, the country is just keeping up with last year's placement, only behind of China - not surprising due to the size of that population and the Chinese people's passion for online games - and the United States.

Two curiosities: this year, for the first time, eSport will break the US$ 1 billion barrier of revenue and North America should account for US$ 400 million of that pie.

The survey also revealed that the global average revenue per enthusiast should be US$ 5.45 in 2019.

Looking only at the Latin American countries, the list is led by Brazil, with 9.2 million fans. Brazil has a 20% growth in its eSports audience and reaches 21.2 million fans in 2019. Of this total, 9.2 million are enthusiasts (those who always follow) and 12 million are occasional.

Newzoo is the only research company that engages in games and eSports in global studies, mapping Asia, North America, Latin America and Europe.