The Board of the House of Representatives analyzed Paulo Azi's text and, because it is similar in theme, decided that it would be annexed to PL 4062 of the year 2012, by Manoel Júnior. Both deal with the legalization of casinos in resorts. But since the last project was already linked to PL 442/91, Azi's one is added to the 442, which includes the legalization of all gaming modalities, not just casinos. It is hoped that the topic will be discussed in the House Plenary. 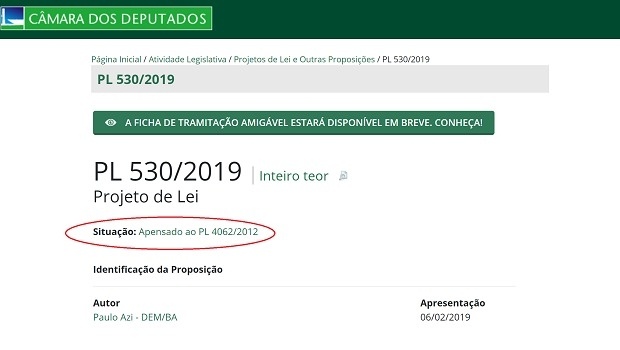 The new bill authored by Paulo Azi (DEM-BA), PL 530/19, which deals with the installation of casinos resorts in Brazil, was joined to PL 442/91 by the voting table of the Chamber of Deputies.

The parliamentarians decided to attach the proposal of Azi to the project that deals with the same subject that has been waiting for approval for more time in the House.

Unlike PL 530/2019, which would only authorize casinos, PL 442/91 is more comprehensive and includes rules for other gaming modalities such as bingo and jogo do bicho.

Currently, PL 442/91 includes 20 joined projects dealing with gaming activities. If it is approved, the final text of PL 442/91 will replace the text of the other joined projects. To be modified, it is needed a plenary amendment signed by all party leaders and the approval of the relator of the original text, Guilherme Mussi. If this approval does not occur, the text can only be changed during the voting in the plenary of the House.