Kate Chambers, Clarion Gaming Managing Director, and Evert Montero Cárdenas, president of Fecoljuegos, met hours after the opening of ICE London 2019 to sign the cooperation agreement that will be valid this year. The two organizations committed to carry out the promotion of the contents and events that are carried out in each of the digital and marketing strategies that are used. 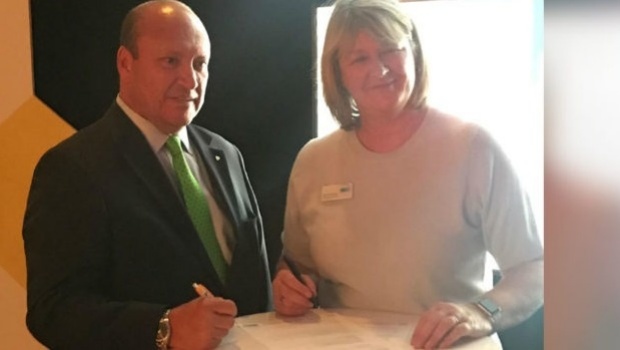 The agreement also includes networking opportunities, content advice, presentation of personalities and participation and intervention in public spaces organized by the parties.

Montero Cárdenas not only has participated in the last editions of ICE London as a speaker in conferences and assistant, but also had the privilege of being named in 2018 honorary president of Juegos Miami, an event also organized by Clarion Events that brings together the main advances and growth of the industry in Latin America. The previous edition chaired by Colombia was a success given that the country was known for being a pioneer in the regulation of online gambling.

"Fecoljuegos (Colombian Federation of Entrepreneurs of Games of and Chance) has had the fortune of having great allies like Kate Chambers, her support in the recognition of our work as a union in high class scenarios has been very important, since it has given us the opportunity to make the industry visible, establish new relationships and become an international benchmark, "said Montero Cárdenas.

Clarion has found in Fecoljuegos support in the academic agenda of the fairs that have been held in different parts of the world. The Federation has promoted the importance of professionalizing the sector and has undertaken a determined campaign to improve the reputation of the industry, giving an added value to spaces like these that manage to gather up to 30 thousand visitors, between operators and regulators from different countries.