Speaker at ICE London since 2012, Luiz Felipe Maia received the award Lawyer the Year at 'Gaming Law' in Brazil by Corporate INTL during the 2019 edition of the event. The professional points out the good moment of the country in the international market after the law that releases sports betting. 'I'm happy to be recognized for my years in the industry. We must value the participation of Brazil here in England, which was extremely positive, 'said Maia. 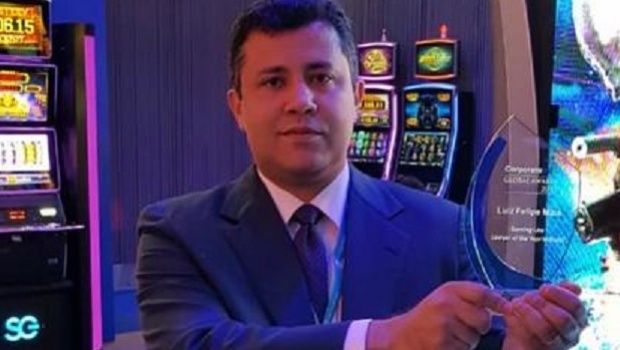 ICE London 2019 ended with a positive balance for Brazil. With the recent approval of the law that releases sports betting, Brazilian representatives at the largest fair in the gaming, betting and lottery industry in the world had a full schedule since the opening on Monday (4). Luiz Felipe Maia, Partner of FYMSA Advogados, had one more reason to celebrate the success of the country in the event. This Thursday (7), at the ExCel in London, he received the award of lawyer of the year specializing in 'Gaming Law' in Brazil.

"I'm happy to be recognized for my years in the industry. And receiving the award inside an event like ICE London is special. It is necessary to value the participation of Brazil here in England, which was extremely positive," commented Maia.

"With the approval of Law 13,756, which created fixed-odd betting on sporting events, our country was the ball of the occasion. We have received numerous consultations on the regulation of sports betting and also on the release of casinos. I attended meetings with more than 20 companies," says the lawyer, who was a speaker at ICE London 2019.

Maia had an active participation during the London event. In addition to being a speaker on ICE Vox programming, he was an IMGL Masterclass instructor in the theme "Sports Betting - Evolving Issues". "Major players in this market are interested in knowing how the process of regulating sports betting in Brazil will be, which proves the great potential of our country to receive investment from international and domestic public companies," he added.

The panel of which Maia participated in ICEVOX discussed the perspectives of the gaming industry in Brazil and was attended by Alexandre Manoel Angelo da Silva and Waldir Eustáquio Marques Júnior, respectively secretary and general coordinator of the Secretariat for Fiscal, Energy and Lottery (Sefel) of the Ministry of Economy. Experts from several countries discussed issues such as data use, sports integrity, advertising and factors that could create legal obstacles in different markets.

"I have been a speaker at ICE London since 2012 and it is always a great opportunity to exchange relevant information. We live an important moment of transition in Brazil, with the possibility of implementing a new business model that will bring investment and job creation to the country, "says Luiz Felipe.

He is founding partner of the law firm Franco, Yoshiyasu, Maia, Simões and D'Alessio Lawyers and head of the team of gaming, internet and technology. He has more than 18 years of professional experience involving business structuring in Brazil. Graduated in Law by USP and Master of Laws by UFPE, he is negotiator and mediator certified by the Harvard Negotiation Program, as well as negotiation professor. He received several international awards in recognition of his role as a gaming and technology lawyer in Brazil and was selected by the international publication Lawyer Monthly among the 100 best lawyers in the country. He has lectured at ICE London, IE - Instituto de Empresa Business School in Madrid, Juegos Miami, IMGL in San Diego and EiG Totally Gaming in Barcelona.

Since 2005 Corporate INTL (www.corp-intl.com) has been leading the way connecting business leaders, financiers and advisers around the world, with a circulation of over 70,000 individuals globally and a database of over 1 million people. Corporate INTL’s annual awards mark excellence for the world's leading advisers and financiers in an array of countries and continents.