To stop criminalizing the activity

The Brazilian Legal Gaming Institute (IJL), a non-governmental organization whose purpose is to produce and stimulate studies and research on gaming, lotteries, draws and entertainment, require its admission as Amicus Curiae in ADPF 563 proposed by the Humanist Solidarity Party (PHS) with the objective of liberating the exploitation of games of chance by private initiative. The Rapporteur of ADPF 563 is Minister Edson Fachin. 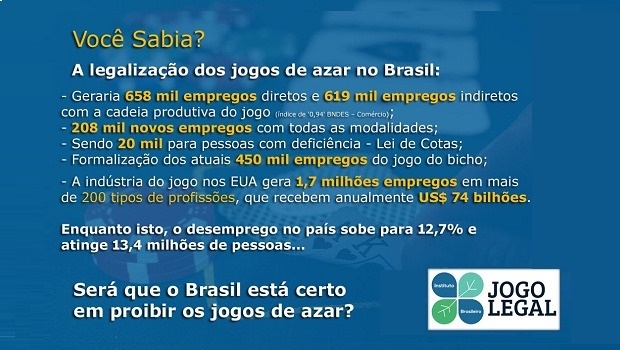 In their presentation, the lawyers of IJL Régis Fernandes de Oliveira and Melina Soares de Souza, ask that it is allowed "the admission of the applicant as an amicus curiae of the present proceedings, with the final aim of providing subsidies on the matter discussed so that the Ministers feel more comfortable to decide on a very important matter."

"The discussion here is quite simple: is the decree-law passed by former President Eurico Gaspar Dutra in effect for a long time? Is it compatible with the current legal order stemming from the Federal Constitution of 1988? Taxatively, arts. 170 to 175 of the Federal Constitution made private activity free of all economic activity (article 173). Therefore, any fence prior to its advent renders it incompatible with the supervening legal order," says IJL to defend the non-criminalization of the activity in Brazil.

In ADPF 563, proposed by the PHS, the lawyer João Caldas da Silva assumes that "criminalizing the private economic activity of gambling is not appropriate and proportional, or due to the inadequacy of the good legally protected by art. 50 of the LCP and Decree-Law 9.215, of 1946 (moral and good customs), or because the State that prohibits, is the same that exploits the activity.”

In the action, it is affirmed that the liberation of the exploration of games of chance by the private initiative is a clear opportunity of generation of income, jobs and of collection of taxes, in a frame in which the Federated States need of economic alternatives to return to grow.

"The governor and the Mayor of Rio de Janeiro, for example, defend the liberation of the activity as an alternative to overcome the fiscal crisis that the federated entities face. Rio’s Mayor, Marcelo Crivella, has already defended the construction of a tourist complex, with resort and casino," it says.

According to the Party, the maintenance of the prohibition is neither reasonable nor proportional and none of the motivations for the edition of the norm is currently supported.

"Allowing private initiative to exploit the economic activity of gambling does not offend morals and good manners and is in perfect harmony with the legislation of the vast majority of countries in the world. The prohibition imposed by the norms attacked does not find sustentation and validity in the Constitution of 1988 ", it concludes.