The 98th regular meeting of the National Forum of Secretaries and State Officers of Tourism (Fornatur), recently held in Goiânia, was attended by the Minister of Tourism, Marcelo Álvaro Antônio. There, the secretary of Pernambuco, Rodrigo Novaes, and the President of Fornatur, Hugo Paiva, defended the legalization of casinos as a tool to generate employment and income. The Forum was attended by 21 secretaries and state tourism leaders from all over Brazil. 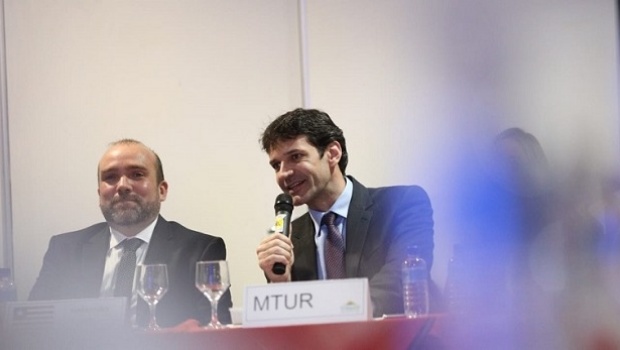 Decentralization of funds for national and international promotion, creation of the Market Intelligence area, liberation of casinos with specific legislation and limited number of states, integrated participation of states in fairs and events, creation of a security model with Tourism Interest Zones and the integration of public policies between the Union and the States. These were some of the topics discussed at the 98th regular meeting of the National Forum of Secretaries and State Officers of Tourism (Fornatur), promoted by the Forum in Goiânia. The event was attended by 21 secretaries and state tourism leaders from all over Brazil.

The Tourism Minister, Marcelo Álvaro Antônio, stressed that the integration of public sector policies at the federal, state and municipal levels creates an awareness of the importance of the union around the priorities of the country. "Being here today, on National Tourism Day, with representatives from the 26 states and the DF, shows that we are all one. Our priorities are getting better, we are walking the same path. Together we want to put Brazil at the center of development and tourism is one of the main allies," he said.

The Secretary of Pernambuco, Rodrigo Novaes, evaluated that the challenges of the state, of total tourist vocation, were renewed. "To shape a tourism product, we need to improve infrastructure, promotion, and we also support casinos, a tool that goes well with the creation of poles that generate jobs and income in the interior of the state. We are focused on tourism and what tourism can transform in the country," he concluded.

The president of Goiás Turismo, Fabrício Amaral, hosted of the meeting, highlighted the importance of an effective public policy for the tourist segment in Goiás. "We are a region integrated with the Central-West by the Central Brazil Consortium. And, according to the governor Ronaldo Caiado, who gives us total freedom of work, we will prioritize the regional development of the State. We have 10 beautiful regions, with potentials of all possible shapes and a mosaic of beauties. Unfortunately, in recent years, other economic areas have been prioritized. We need to bet on tourism to bring development opportunity to every state. Our role as part of the public power is to support and help people in this area to undertake," he said.

The president of the Brazilian Tourism Institute (Embratur), Leônidas Oliveira, presented what he calls the "New Embratur", which will be transformed into an international tourism promotion agency. "In general, agencies have been more efficient than the autarky management model, with more flexibility for market partnerships, international deals and, above all, budget increase. This allows receiving dividends from donations and public-private partnerships, in addition to the linked resource," he said.

The current president of Fornatur, Hugo Paiva, recalled that these measures are urgent because Brazil “helps” countries like Peru and Argentina to have more expressive performance in the sector, even having recently hosted major events such as the Olympics, and football World Cup and Confederations championship.

"We invite the Minister and President of Embratur, taking advantage of the event in Goiânia, to deal with issues that are blocking national tourism, such as the air network, the liberation of casinos and national parks. One in five jobs generated in the world, at least, come from the sector, according to the World Tourism Organization. In this moment of economic crisis, as is the case of Goiás, tourism is the quickest response to this problem, with the generation of jobs and income," he pointed out.