It was proposed by Deputy Érika Kokay

The current president of the Caixa Econômica Federal, Pedro Guimarães, missed the public hearing in the Labor, Administration and Public Service Committee of Brazil’s Federal Chamber that would discuss with officials representatives actions such as privatization of strategic areas such as lotteries. Due to the absence, the hearing was canceled by Deputy Érika Kokay, who proposed the debate. 'You can’t accept such disrespect to the Brazilian Parliament,' she said. 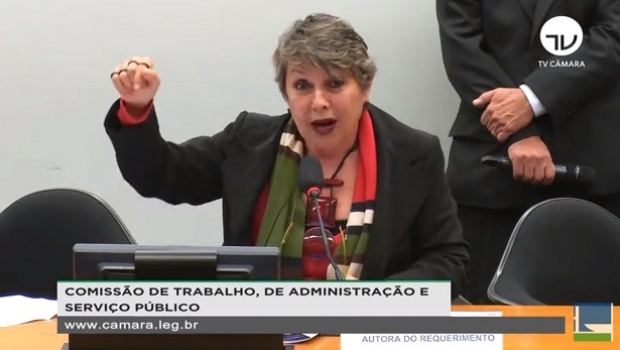 Guimarães would discuss with management entities, representatives of civil society and Caixa employees some measures of its management. Due to his absence, the public hearing was canceled by Deputy Érika Kokay (PT / DF), who proposed the debate. The deputy explained that the participation of the manager had been confirmed with the agreement established between the House and the economic team of the government.

Pedro Guimarães would be heard on issues as the privatization of profitable and strategic areas, such as lotteries; the withdrawal of the institution from the Curator Council of the Guarantee Fund for Length of Service (FGTS); the reduction of Caixa's employees, through the Voluntary Termination Plan (PDV) and the non-convening of those approved in the tender; the accounting maneuver to cover expected losses with defaults in the real estate financing portfolio; the devaluation of real estate repossessed in administrative operations; the appointment of “personal trainer” for the position of consultant, among other controversial measures.

Deputy Érika Kokay was keen to criticize the current president of Caixa to participate in the debate in the Chamber. "You can’t accept such disrespect to the Brazilian Parliament for the way it happened. An agreement was made for Pedro Guimarães to come here to offer answers to the questions that would be asked regarding the policies of weakening the bank," said the parliamentarian.

Initially, according to her, the call was for the Minister of Economy, Paulo Guedes. At the suggestion of the government itself, the invitation was changed. However, instead of the main minister of the government's economic team, the agreement provided for the Caixa’s President to attend the hearing, who had suggested the date of July 9 for the meeting. She also said that, at no time, the current bank manager presented any proposal regarding the time of the meeting, despite having been consulted repeatedly on the matter.

The situation was considered regrettable by the parliamentarians who are part of the Committee on Labor, Administration and Public Service. "If there is no appreciation of the Legislature, which is being disrespected by the President of Caixa, who will respect it? The Chamber has political representation and this needs to be taken into account," commented Deputy Bohn Gass (PT/RS), present at the hearing.

The president of the National Federation of Staff Associations of Caixa (Fenae), Jair Pedro Ferreira, protested against the fact that the current manager of the bank missed the opportunity to clarify the many doubts of Caixa's society and employees about the restructuring proposed by management. "It is serious, for the social and economic development of the country when there is a process of dismantling an important bank such as Caixa, that the president of the entity refuses to attend a public debate with parliamentarians," he said.

For the president of Fenae, the population and the workers of this country need to be clarified urgently about the role that the current management of the public bank imagines for Caixa. "And the hearing in the Chamber, sadly canceled because of Pedro Guimarães' refusal to attend, was the appropriate institutional stage for such clarifications to be made," concluded Jair Ferreira.

As the author of the application, Kokay explained that she will send a new representation to the Ministry of Labor and the Court of Audit of the Union (TCU) against the restructuring process at Caixa. The president of the bank will also be the subject of a new request to attend a hearing in the Chamber. This time, the goal will be to formally convene him, which will force him to attend the meeting.