Bookmaker KTO is the new sponsor of Brazil's Pelotas, the third-largest soccer force in Rio Grande do Sul. Brazil's Pelotas is known for having the most fanatical soccer fans in this state. The Xavantes accompanies the team everywhere the team plays they are loud and passionate wherever Brazil's Pelotas play. For the fourth consecutive year, Brasil de Pelotas is in the Serie B of the Brazilian Championship and consolidates itself as one of the forces of national football. 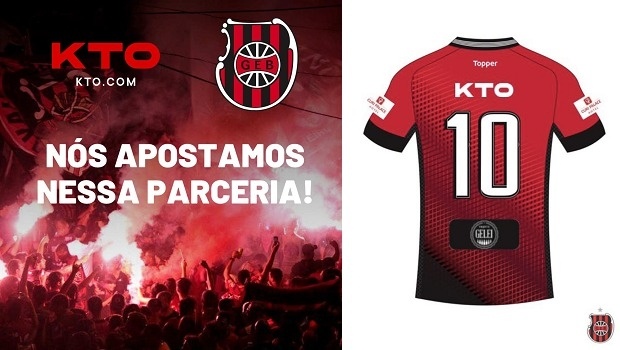 Edu Pesce the executive manager of Brasil de Pelotas is excited about this partnership and claimed that this partnership will help confirm Brasil de Pelotas as a force in the national scene. "We were very happy to have a company like KTO with its worldwide appeal with us, KTO believes in Brasil's potential and the greatness of the club, including the gaucho football elite and the way the club is increasingly becoming a bigger player on the national scene, and in Serie B. It is our pleasure to carry the KTO brand on our sacred cloak, “ He said

The KTO Sponsorship  allows the brand to be exposed to the back of Brazil's Pelotas Team shirt and above the number. This is the second major sponsorship the bookmaker has made in the Brazilian market in less than six months. KTO is also a sponsor of the Gaucha Futsal League. “We are very happy to have Brasil de Pelotas as our first partner in national football. The Xavante tradition is huge and the passion of the fans is recognized internationally. We are very proud to associate our brand with the club, and we will develop several partnerships that will help Brazil grow even more”, emphasized KTO's Brazilian market manager, Cássio Filter.

The match against the Oeste, in Barueri / SP today, marks the debut of the brand KTO on the back of Brazil's Pelotas uniform.

Brasil de Pelotas is a 107-year-old soccer club, founded on September 7, 1911. It is considered today the third force of Rio Grande do Sul football, behind only Grêmio and Internacional, with what is considered the largest and most faithful supporter of the interior of the state. The club was champion in the first edition of the Rio Grande do Sul Football Championship. In 1985, was placed 3rd in the Brazilian Championship, eliminating the almighty Flamengo of Zico and company. It also has approximately 5,000 memberships. Currently competing in the First Division of the Gaucho Championship and Series B of the Brazilian Championship.

KTO operates under Curaçao license. The group was founded by a group of Scandinavians with over 20 years of industry experience in the sports betting and casino market. Currently, the main markets for the Curacao licensed bookmaker in Europe are Finland, Germany, Austria, and Norway. In Brazil, the company arrived in early 2019 with a strong partnership with Napoli for Latin America. In addition to the partnership with Brasil de Pelotas, the company is the official sponsor of Liga Gaúcha de Futsal.