Strong editorial in favor of the activity

Through an overwhelming editorial this morning, the most important newspaper in Brazil can speed up the process of regulating the betting market in the country with the legalization of other forms of gambling such as casinos. 'It is no longer possible to ignore a reality that imposes itself in the field ... it is time to adapt obsolete legislation to current times,' says O Globo. 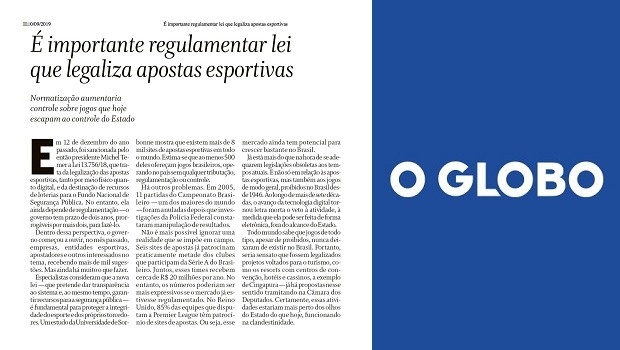 On December 12 of last year, it was passed by then President Michel Temer Law 13.756 / 18, which deals with the legalization of sports betting, both physical and digital, and the allocation of lottery resources to the National Fund for Public Security. However, it still depends on regulation - the government has two years, which can be extended for another two ones.

Within this perspective, the government began listening last month to companies, sports entities, gamblers and others interested in the topic, receiving more than a thousand suggestions. But there is still much to do.

Experts consider that the new law - which aims to provide transparency to the system while ensuring resources for public safety - is critical to protecting the integrity of the sport and the fans themselves. A Sorbonne University study shows that there are over 8,000 sports betting sites worldwide. It is estimated that at least 500 of them offer Brazilian games, operating in the country without any taxation, regulation or control.

There are other problems. In 2005, 11 matches of the Brazilian Championship - one of the most important in the world - were canceled after investigations by the Federal Police found manipulation of results.

It is no longer possible to ignore a reality that imposes itself in the field. Six gambling sites already sponsor nearly half of the clubs participating in the Brazilian Serie A. Together, these teams receive about R$ 20 million (US$ 4.9m) per year. However, the numbers could be more expressive if the market was already regulated. In the UK, 85% of Premier League teams are sponsored by gambling sites. That is, this market still has the potential to grow a lot in Brazil.

It is time to adapt obsolete legislation to the present times. And not only in relation to sports betting, but also to gaming in general, banned in Brazil since 1946. Over the course of more than seven decades, the advance of digital technology has rendered the veto of the activity in something obsolete, as it may be made electronically, out of State reach.

Everyone knows that gaming of all kinds, although forbidden, never ceased to exist in Brazil. Therefore, it would be wise for tourism-oriented projects to be legalized, such as resorts with convention centers, hotels and casinos, such as Singapore - there are already proposals for that effect in the House of Representatives. Of course, these activities would be closer to the state's eyes than today, operating underground.