The Brazilian delegation led by Senator Flávio Bolsonaro was received on the first working day in Las Vegas by Rob Goldstein, CEO of LVS Group, of tycoon Sheldon Adelson. 'Brazil is Las Vegas Sands' number 1 interest for investing US$15 billion in 2020 ... we just need to regulate the matter for transparency and legal certainty,' says the president's son in the halls of the Venetian casino giving this way a strong support to the legalization of integrated casinos in the country for this year. 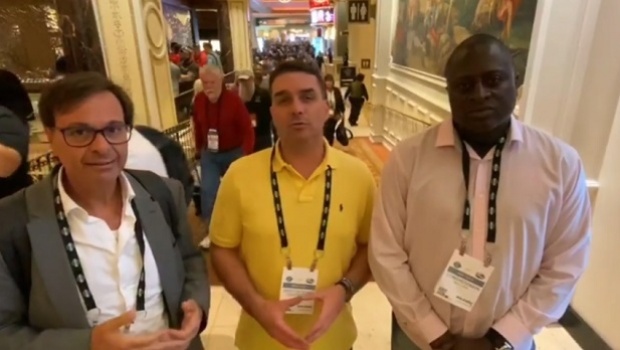 Accompanied by the president of Embratur, Gilson Machado, and deputy Hélio Lopes, Bolsonaro held the first of the meetings that the group is willing to have in their stay in Las Vegas with investors and authorities.

In his social networks, Bolsonaro has a post titled: "FOREIGN INVESTMENTS: more tourists, more jobs for Brazilians", where he described part of his meeting with the powerful group of Las Vegas Sands casinos and even uploaded a short video of the meeting.

“Just arrived in Las Vegas, we met with a group of foreign investors specialized in integrated resorts. We heard from the CEO and President of the Group, Rob Goldstein, that they have already been contacted by several countries, but the number one interest is in Brazil,” commented Bolsonaro.

The host of the meeting, Rob Goldstein, is president and Chief Operating Officer of Las Vegas Sands (LVS) since 2015 after serving in a variety of leadership positions since joining the company in 1995. As president and COO, he provides strategic direction to the company global properties, guides the pursuit of new development opportunities and oversees the company's efforts to continually maximize value for its shareholders.

"They are ready to invest around US$ 15 billion dollars in 2020. We just have to do our homework," added Bolsonaro in a clear reference to the work that must be done immediately by politicians and legislators to vote once and for all for it legalization of casinos and failing to miss these opportunities for investment, , tourism and tax generation.

After the meeting, in the halls of Hotel Venetian’s casino, the senator made another video message with Machado and Lopes. “We receive about 6.6 million tourists a year, less than the Eiffel Tower elevator (Paris) alone. For various reasons, tourists with high purchasing power fail to know all the good that we have, for all tastes, either because they do not know it or because of the distorted and exaggerated news that arrives outside Brazil and scares them,” assured Bolsonaro.

“Integrated resorts, such as those in Singapore, for example, generate thousands of jobs and feed the entire production chain in a short time. We held another important meeting, in which large companies reinforced their willingness to invest billions in Brazil, as long as we regulate the matter so that they have transparency and legal security,” concludes the son of the president who expressly shows himself in favor of legalizing casinos in resorts.