Betting site Apuesta Total decided to return the money to its customers after the fans of the national Peruvian team were dissatisfied with a 4-2 loss to Brazil on Tuesday in Lima for the South American Qualifiers after a controversial arbitration. With the slogan 'Brazil did not win today', the company announced its call to bettors on social media. 'As fans we feel powerless and we decided to return the bets of those who trusted Peru, putting ourselves on the side of the fan who believed in our team,' said Gonzalo Pérez, CEO & Partner of Apuesta Total. 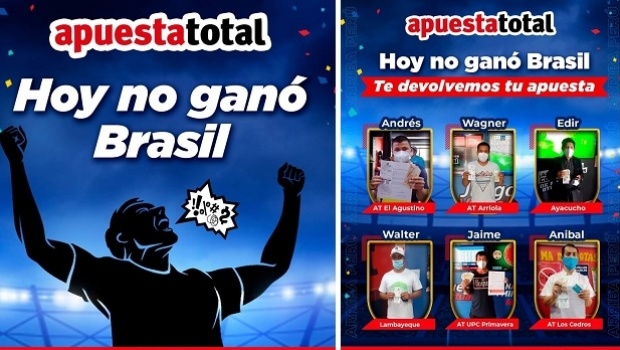 Julio Bascuñán's arbitration not only complicated the Peruvian team against Brazil on the second day of the Qualifiers. Many bet in favor of a local victory and ended up more than disappointed, however, not all those who trusted Ricardo Gareca and his managers lost their investment.

During the match played at the Estadio Nacional, the Chilean referee scored controversial penalties and plays that ended up damaging Peru. The final result was 4-2 in favor of the ‘Verdeamerala’. Faced with this situation, bookmaker Apuesta Total decided to compensate its users and announced that it will return money to those who bet on Peru with the phrase “Brazil did not win today.”

Through social networks, the company announced its decision after ensuring that Tité's team "did not win" the match. "Brazil played with 12 and we are # 12 in Peru, so we will refund your bet!", said the firm.

“Incredible reception from the public and the media of our campaign" Brazil didn't win today"! As fans we feel powerless with the result and we decided to return the bets of those who believed in Peru, taking the side of the fan who believed in our team,” stated Gonzalo Pérez, CEO & Partner of ApuestaTotal.

The company reimburses the amounts following some conditions. Firstly, single bets, pre-match (before the match), whose selection was W1 in the “Match Result” market and which have not been partially cashed (cash out in the online channel) will be returned. The firm assured that those who bet on Brazil will be paid the prizes according to the calculation of the bet.

"Economically it has had an important impact on us because 62% of the tickets were in favor of Peru and this is what we have returned, but we see it as an investment that has already paid off for a long time," says Pérez, proud of his actions in favor of the customers.

Returns are made under the ‘Retail’ and ‘Online’ channels. For the ‘Retail Channel’, customers must follow these steps:

1. Go with the physical ticket in good condition to the cash register of the preferred store and deliver it to the promoter along with identity document.

2. The promoter validates the conditions, a form is filled out for the manual payment and it proceeds.

3. Cannot be chased in terminals, and there is until 10/15 to request a refund. As of 10/16, applications are no longer accepted. For the Telesales channel, clients must contact by WhatsApp to coordinate the return.
In the case of the ‘Online Channel’, Apuesta Total automatically added to the balance of its users the bet, under the same conditions mentioned previously.