The gambling website Tempobet again promoted an action in a video by Brazilian football influencer Raquel Freestyle. This time, the company sponsored the challenge between the player and the youth from the Banheiristas channel. In addition to the dispute between the youtubers, it highlighted the game between Bayern Munich vs RB Leipzig, which had the odds for betting on the website presented. 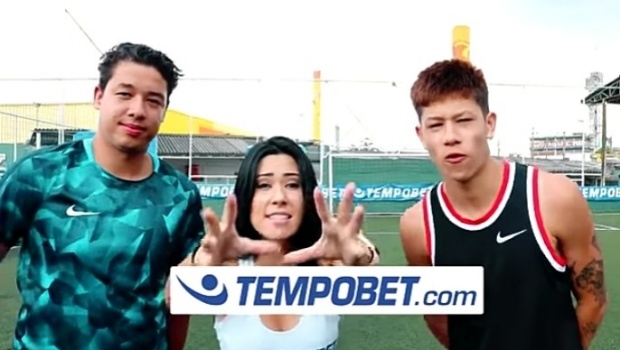 The challenge between Raquel Freestyle and the boys from Canal Banheirista, was to circumvent three obstacles, kick, beat the goalkeeper and whoever scored the most goals would take the challenge.

The dispute between the beautiful freestyle player and the boys was fierce, with breathtaking moves and the result left a doubt: did the goalkeeper favor someone or not? Check out the video and have the answers.

Tempobet brand was displayed on the video several times, and also the odds for the game between Bayern Munich vs RB Leipzig played last Sunday. The logo of the betting site was on the obstacles of the challenges, on the advertising boards behind the goal and in the uniform used by Raquel Freestyle.

Tempobet and Raquel Freestyle started their partnership in September 2019 with an advertising action in which the girl showed her skills on the streets of São Paulo. Since then, the influencer has been participating and promoting different campaigns on behalf of the brand on social networks and on her YouTube channel.

Tempobet, a company based in London and licensed in Curaçao, is very active in advertising in the sports field. The Spanish Championship (La Liga), the English Championship (Premier League) and more recently the Brazilian Championship are some of the examples of their area of expertise. In addition to the tournaments, Tempobet has sponsored some of the main football teams around the world. Arsenal and Manchester City are examples of this. Today, it is the official sponsor of Fulham, in England.