With most of sporting event cancelled around the world and only few games available, the key is to innovate. AGclub7.bet website focused on irreverence and brought to its players special betting modalities, among them is the hunch of when Ronaldinho Gaúcho will be released. Since March 6, the former football player and his brother, Roberto de Assis, have been arrested in Paraguay for using fake documents to enter the country. 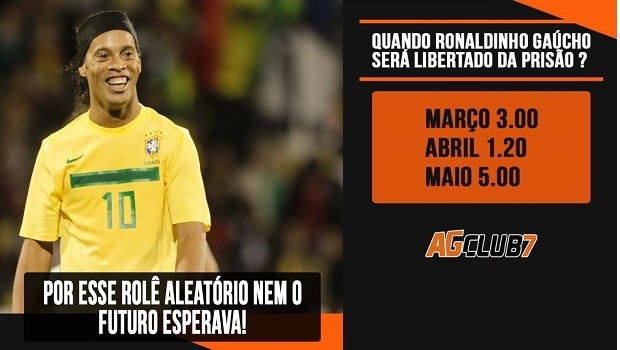 In these times of uncertainty, innovation is a decisive factor for the company to not only survive but to effectively stand out from the competition.

It is necessary to escape the obvious and provide other solutions to the consumer. Interacting in a practical and relaxed way was the idea of AGclub7.bet, providing something different for those to enjoy betting.

In addition to the aforementioned, at AGclub7.bet the public finds sports such as: ice hockey, table tennis, handball, among others.

And the digital world is also present on the website platform. eSports, in several categories, are also available for betting with the highest prices on the market.

AGClub7.bet's partner App7 Sistemas provides the operator with its Sports Top platform, a service that covers 100% of the needs of betting sites. Elvis Lourenço, CEO of App7 Sistemas, talks about the relationship of companies.

“AGClub7 is one of our best customers. We started the partnership in December last year, but they have been in the market since 2010, if I'm not wrong. They had their own platform and chose to migrate to our Sports TOP, which contemplates the entire online and future physical operation when the regulations come out,” says Lourenço.

“This is the most complete platform of App7 Sistemas where we cover the operator from end to end; from the website, passing bets, to controlling quotes, events, administrative, financial, affiliate marketing; that is, all the systems part we have with Sports Top. The operator is 100% covered and needs only to worry about the day-to-day management of the business,” adds the businessman.

AGclub7.bet is a sponsor of the Pernambuco team Nautico. The agreement will run until the end of 2021. The company has Aloísio Chulapa as its ambassador. The former player played for major national and international teams such as Flamengo, Goiás, São Paulo, Vasco, Paris Saint-Germain, among others.

Ronaldinho Gaúcho and his brother and businessman, Roberto de Assis, have been in preventive custody since March 6, in Asunción, Paraguay, on charges of having used false passports to enter the country. The defense of the former Barcelona and the Brazilian national team player filed an appeal so that the Assis brothers can carry out house arrest. The request, however, was denied by the Paraguayan court on March 10.