Freebets.com, a leading UK betting comparison site owned by XLMedia, released an informative survey outlining the state of the UK’s online betting market during the COVID-19 lockdown. The report reveals that over 70% of British bettors continuing to place bets despite the temporary suspension of almost all major professional sports, with 30% not wagering at all. 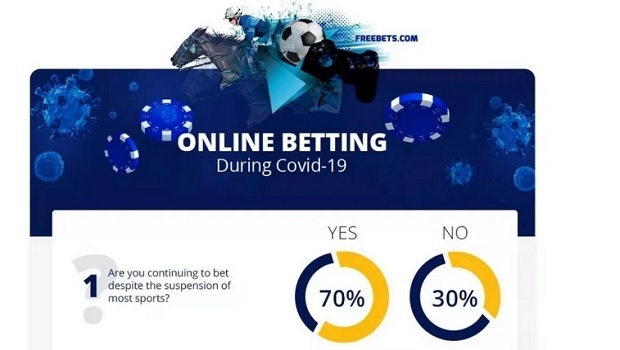 The survey questioned visitors to the Freebets.com site between April 6 and April 26, 2020 and found that horse racing was by far the most popular sport to bet on, with 34.5% of respondents saying they were still placing wagers on international racing.

Despite UK and Irish courses being closed as of mid-March, racing carried on in countries including Australia, the US and Sweden.

The survey also showcased the rise in prominence of eSports and virtual sports, as betters embraced these new categories. A significant 40% of players said that they have now betted on these computer-based sporting options.

Some 24% of players had tried online casino during the period, with just 5.5% playing internet poker and 6.5% enjoying some form of online bingo, but 64% said the had not played any of these games.

Stuart Simms, XLMedia PLC Group CEO said: “The results of this survey have been particularly encouraging, illustrating how our customers have continued to enjoy betting on sports at this time.”

“The popularity of eSports and Virtual Sports stand out as the data suggests that these new categories have begun to cement their position as viable betting options,” Simms added.

Somewhat surprisingly, football also remained an attractive proposition for betting fans as 25% said they were continuing to bet on the sport, even though the only live games were from less popular leagues such as the Belarusian Premier League and Nicaraguan Primera Division.

Last week, the GB Gambling Commission also published a report looking at the levels of gambling during lockdown. The study found that 1.8% of respondents had stopped gambling entirely, while a further 3.3% reduced gambling spend in this period and 4.8% cut playing time.