Sorare, the French blockchain startup that publishes a fantasy football game, has announced the arrival of star footballer Diego Maradona thanks to a partnership with the Argentina football club Gimnasia la Plata. Maradona and his team are joining players from renowned clubs such as Juventus, Atlético Madrid, Spartak Moscow, Lyon, and Porto. 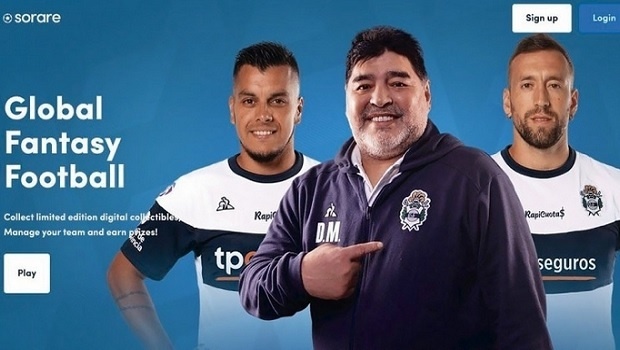 The launch of Gimnasia - the first club from South America to license its players and coach rights to Sorare- is a key step for the company to create a global fantasy experience where players can trade and play with football clubs from all around the world.

Diego Maradona will be the first coach card issued on Sorare. The game has plans to make these cards particularly useful for managers that will add bonuses and unlock new features. For Gimnasia La Plata, this partnership is part of an initiative to promote the brand on new digital platforms, especially online games that are ever more relevant for football.

On Sorare, players and coaches are represented by limited edition digital collectibles: blockchain cards. Blockchain technology (Ethereum) is used to guarantee the authenticity, traceability, and digital scarcity of the collectibles. For every player and every season, Sorare issues one Unique player card, ten Super Rare player cards, 100 Rare player cards. These past weeks, some unique cards have been collected for more than US$2,000. ​

Every week, managers compose teams of 5 player cards to compete in different football divisions to earn prizes and unlock achievements. Managers get ranked based on the performance of their players on the pitch, and bonus points related to the power of their cards. The more skillful a manager is, the more rewards they can earn in the game.

Sorare leverages the power of digital collectibles in gaming, with the most well-known sport in the world to create a new way for soccer fans to engage with their favorite football players.

Maradona and his team are joining players from renowned football clubs such as Juventus, Atlético Madrid, Spartak Moscow, Lyon, and Porto.

Nicolas Julia, CEO at Sorare, said: “Gimnasia la Plata is one of the oldest football clubs in Argentina. We’re proud and excited to have them join as the first South American club on Sorare. Adding the Maradona coach card to Sorare will also enable new possibilities for the game. It’s a key step in our vision to create a global fantasy football game.”

Noberto Gobbi, Marketing & Commercial Director at Gimnasia La Plata, explained: “​The new digital tools represent not only a great opportunity for Gimansia to offer our fans new interaction possibilities, but also new sources of monetization. In this new scenario of sports marketing, being able to use them for the benefit of both the institution, our partners, and fans gives us a clear added value.”

“That is why we are the first club in Latin America to be part of the Sorare community, joining the most important clubs in the world. Together we hope to generate new actions, bring entertaining options to our supporters, and continue to position ourselves as an innovative club in technological matters,” Gobbi concluded.