President Jair Bolsonaro signed yesterday (Wednesday 27) the project that opens a supplementary credit of almost R$ 776 million (US$143.6m) to reinforce funds of the Ministry of Justice and Public Security (PLN 7/20). These amounts will come from the collection of lotteries following the determination of the Federal Supreme Court (STF). The proposal was transformed into Law 14,005/20, published in the Federal Official Gazette. 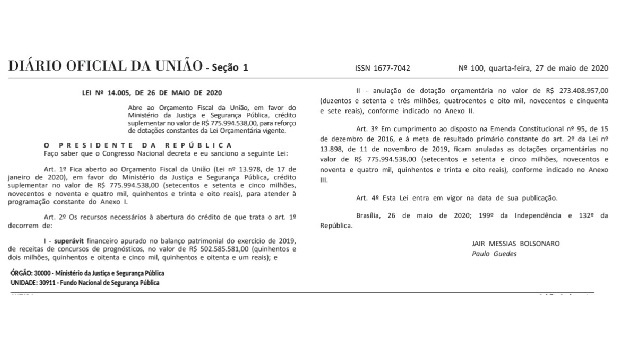 The resources will be transferred to the states and the Federal District. The release of the funds is the result of a decision by the Supreme Federal Court (STF) that determined the transfer of official lotteries to federal entities for actions in the area of public security.

Of the amount released, R$ 584.4 million (US$108m) goes to the Improvement of National Public Security action, which includes, for example, re-equipping police and building or renovating police stations. The rest (R$ 191.6 million -US$35.5m-) will go to state public security projects, with an emphasis on combating corruption, and organized and violent crimes.

The supplementary credit comes from the financial surplus with official lotteries and the cancellation of expenses previously provided for. The project was approved by the National Congress Plenary in May. The proposal rapporteur was Senator Izalci Lucas (PSDB-DF).