The Brazilian payment methods company Pay4Fun will be competing for the EGR Awards B2B 2020. The firm is a finalist in two categories and competes for 3 awards in the areas of innovation and services. The nominations crown a successful year for Pay4Fun, which had grown in terms of services almost 1800%. This year’s edition will be virtual and will take place between 21-23 July. 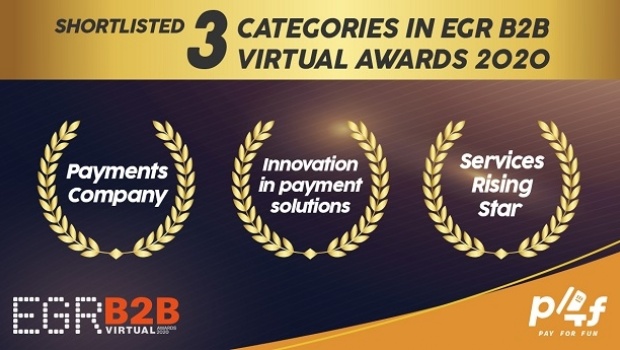 Pay4Fun is in the shortlist of 2 categories and 3 prizes:

Usually, the EGR B2B Awards is a grand ceremony that brings together the most prominent players in the gaming market from around the world. Only this year, due to the pandemic, the meeting will be held online.

However, the event remains a unique opportunity for interaction between the leading names in the gaming industry and celebrates the best service providers.

Together with the award ceremony, the online event will offer an opportunity to share excellent content aimed at the prospects for future growth and to participate in discussions on critical issues at a sensitive time in the world economy.

The winners of each award category will be revealed through a series of online ceremonies, divided over the three days of the event.

In addition to the award ceremonies, an extensive series of live online content will address some of the most significant themes and challenges currently facing the industry.

Pay4Fun is increasingly expanding operations in the Latin market

This year, Pay4Fun took another significant step towards its expansion. The company will change from a Limited Liability Company (LLC) to a Corporation (Corp).

Leonardo Baptista, Pay4Fun’s CEO, clarifies that this move is preparing the company for a new capital inflow.

About the company’s growth, Leonardo demonstrates that from 2018 until today, Pay4Fun had grown in terms of services almost 1800%.

These values reflect the growth in the number of registered users of the company’s service since, in that same period, Pay4Fun had a jump of users in the order of 1400%. The company currently has almost 100 international partners integrated into its platform.

Initially, Pay4Fun S.A will be privately held. But the company is in the process of opening a second round of investments soon. In the medium term, Pay4Fun also considers an IPO.

Discover everything EGR does

The EGR B2B Awards rewards and celebrates the best service providers in the online gaming industry, intending to recognize the achievements of companies from all categories in the industry, such as gaming and betting software, mobile networks, payments, recruitment, IT and infrastructure.

EGR Global (eGaming Review) is the largest publisher in the gaming industry on the planet. It is also an essential source of news, analysis, and opinions in the e-gaming sector.

EGR publications are a reference in market information and panoramas, in addition to bringing articles and interviews with the most important names in the sector.

EGR is responsible for the only title in the gaming area aimed at the B2B audience. Its biggest website is EGR Intel, but it also owns the famous brands EGR Technology, EGR Compliance, EGR Marketing, and EGR North America.