Johnny Ortiz, founder and president of Zitro, one of the world leaders in the manufacture and development of slots, video bingo and interactive games, defended at first GMB’s online event the approval of all gaming modalities in Brazil and not just IR's. For Ortiz, 'the big resorts with casinos demand investments that take time and generate jobs and taxes much lower than the broader regulation of the whole gaming activity in the country.' 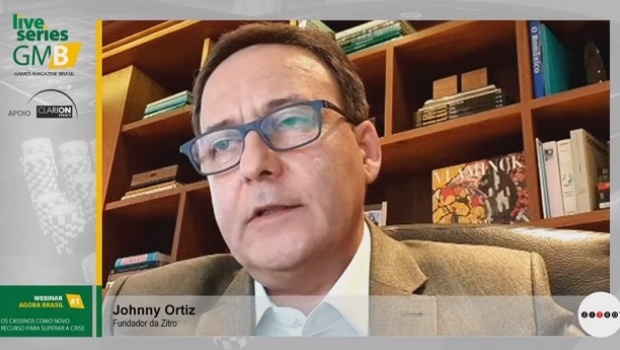 A profound knowledgeable about the Brazilian market, where he worked for several years, Johnny founded and leads Zitro, one of the most renowned manufacturer of gaming machines in the world, operating in casinos and bingos on five continents. During the "casinos as a new resource to overcome the crisis" after post-pandemic webinar, that was part of GMB Live Series division, Ortiz commented that in the year of the closing of the bingos, there were 80 thousand legal machines operating in Brazil and, today, “there are more 500 thousand illegal machines that do not generate taxes.” In his opinion, it is an astonishing number and it is time that the government passed a broad law for different types of gaming, such as IRC’s, urban casinos, bingos, sports betting, and online gaming.

According to Ortiz, it is important that gaming, in all its modalities, be recognized as an economic activity that generates jobs and taxes, which means a strong economic boost for the places where it is well regulated. “Worldwide, the business is well controlled, online, and in Brazil it will be no different,” said Zitro’s executive and, for this reason, the country will have excellent conditions to control gambling activities.

“With strict compliance, any operation in Brazil will be very well controlled internally and externally. Who is against legal gambling is in favor of illegal gambling, which does not bring benefits to the country. With the complete opening of the gaming sector, we can reach more than 1 million jobs and more than R$ 25 billion per year in taxes, apart from direct grants for the licenses of the casinos,” he explains, also exemplifying that traditional local jogo do bicho could generate around 250 thousand jobs.

The businessman regrets the delay in approving a broad regulation of the activity in Brazil and argues that in addition to speeding up this process, “the country must analyze the tax issue very well, as it is very high. Brazil is mature enough to understand that gaming is good for the country.”

Ortiz stated during GMB webinar that “Brazil is wonderful, and our greatest wealth is the people. We have an exuberance for tourism and gaming has a high capacity to attract investments, not only from operators, but also from different suppliers”. According to him, in addition to direct investments, the country can gain a lot from tourism. “With the opening of gaming, the flow of tourists would increase substantially. Today we have about 6 million tourists traveling to Brazil, while France attracts 80 million and Andorra, a small country stuck in Europe, more than 12 million. With the regulation of the sector, we can overcome all these countries,” he said.

During the webinar, Zitro’s president said that if the activity are regulated, he will not only return to live in the country, but will also establish a unit of his company in Brazil. “The game requires manufacturers of so many products, such as furniture, cutlery, TV monitors and several others, in addition to specific products for the game itself, which requires specialists. Today we have 300 engineers in our European unit, which demonstrates our strength as a company that generates jobs. Therefore, I understand that the regulatory framework must be discussed urgently so that we do not take another four or five years to approve all types of games. Zitro wants to bring its expertise to Brazil and offer thousands of jobs and high taxes,” he said.