After starting the week with the broadcasts of games of the Bundesliga, betting site Betsul, in partnership with Stats Perform, now announces that since tomorrow (Wednesday 3), it will also offer LIVE all the games of the Portuguese Championship on its platform. After almost three months of stoppage due to the COVID-19 pandemic, the Primeira Liga will be Europe's second major competition to return to the fields with closed gates. 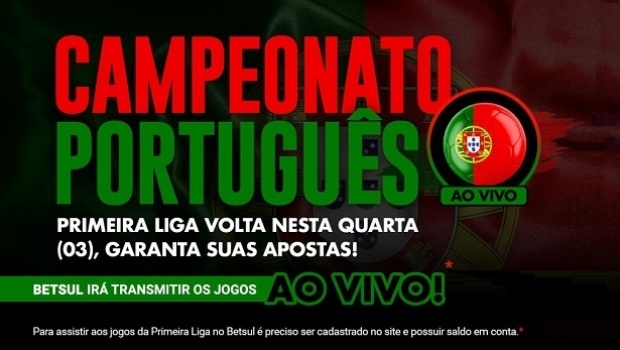 After the return of the Bundesliga and the launch of LIVE broadcasts in Betsul, on May 16, the resumption of the Portuguese Championship will also have a great news. In addition to the long-awaited restart of the competition, which has rivals fighting for the title, all the stories of the final stretch of the Primeira Liga can be closely watched by the betting site users.

From tomorrow (Wednesday 3), when the Portuguese return to play games after the stoppage due to the pandemic of COVID-19, in addition to betting on the league matches with the best odds on the market, users will also be able to watch all of them LIVE and totally free, in a partnership between Betsul and Stats Perform, a multinational leader in the distribution of sports data and content, until the end of the season.

The broadcast of the games will be available to all bettors who have active registration and balance at Betsul, without restriction of minimum credit amount. To follow the live matches and place new bets users has just to log in to the website, access the Portuguese championship page and choose the match they want to watch. The broadcast will be available on the LIVE tab of the chosen game.

With no matches since the 13th of March, the Portuguese Championship resumes its dispute this Wednesday (3). In the midst of the pandemic, the Primeira Liga will be played again tomorrow with two matches valid for the 25th round. From 3pm (Brasília time), Portimense and Gil Vicente have their first match of the round. Later, at 5:15 pm, Porto leader visits Famalicão.

With 32,500 cases and 1,410 deaths from the coronavirus, Portugal was one of the Central European countries least affected by the disease. The success of the preventive measures adopted by the government is one of the reasons for the players' confidence in returning to the fields.

How is the Primeira Liga?

The Primeira Liga is one of those that is fighting hard for the title. Porto and Benfica duel round by round for the leadership of the competition, which at the moment is in the hands of the Dragons (Porto). However, Eagles are on the tail and only one point separates the country's two biggest rivals.

In the classification zone for the next Europa League, Braga, 3rd place, has the vacancy well underway. That is, two others are open, and several candidates are still in the dispute. Sporting also has a slight advantage in 4th place, but as of 5th, occupied by Rio Ave, the fight is big and involves Vitória de Guimarães and the surprise Famalicão.

There are only 10 rounds left to the end of the competition and they are even better with the possibility for users of betting while watching the game LIVE at Betsul.

Betsul is one of the best sports betting sites in South America, developed to meet the most demanding bettors and fans. The website offers a simple, intuitive, and secure interface for the bettor to have fun at will from various betting modalities and an extensive list of sports. The site is licensed by Curacao eGaming, with regulations and registration in Curacao. Registration number: 8048 / JAZ2019-017.

Stats Perform collects the world's richest sports data and transforms it through revolutionary artificial intelligence (AI) to unlock the most detailed information about media and technology, bets and team performance. Company operates at the intersection of sports and technology to unite billions of people around the world through their passion for sports.