MIBR and FURIA, the two biggest Brazilian eSports teams, who faced each other yesterday at BLAST Premier Spring and set a new national record on Twitch with 209,000 simultaneous viewers, set aside their great rivalry and joined together to launch a campaign against racism and police violence that ended the life of George Floyd in Minneapolis (USA) and João Pedro Mattos in Rio de Janeiro. The message on networks transmits the hashtag of the black fight: #BlackLivesMatter and #VidasNegrasImportam. 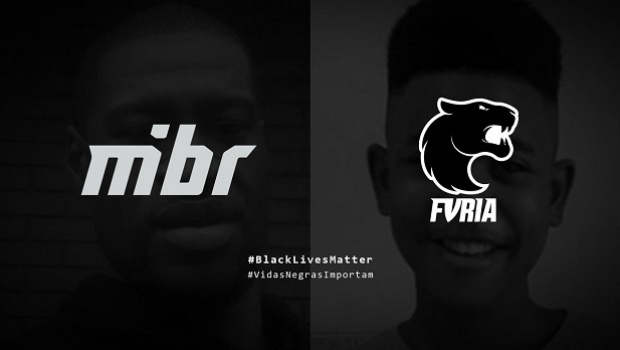 Recent cases of black people killed by police in Rio de Janeiro and the United States are stirring protests not only in the U.S. but also in Brazil. In addition to citizens taking to the streets in search of justice and racial equality, many are showing their positions on social networks because of the quarantine established in the country. This is the case of the eSports teams MIBR and FURIA.

In the Complexo do Salgueiro, in São Gonçalo (RJ), the 14-year-old black boy João Pedro Mattos was shot dead by police officers while playing with his cousins inside the house. He was taken by helicopter officers and found by the family only the next day, already at IML. In the case of George Floyd, the American was killed of "asphyxiation from sustained pressure" by a white police officer, who stood for about nine minutes with his knee on Floyd's neck while he exclaimed "I can't breathe."

Being unable to remain silent in the face of the racism that kills, MIBR and FURIA got together launching the campaign #BlackLivesMatter and #VidasNegrasImportam. In the post, the teams say: “No to facism. Yes to respect. No to racism. Yes to diversity. Killing? Just in a game. In real life, just life. The only acceptable supremacy is the respect of our differences. The differences unite us, and the respect doesn’t separate us.”

Yesterday (1), these teams faced each other and, once again, the Brazilian classic Counter-Strike: Global Offensive (CS: GO) between MIBR and FURIA broke a new national record on streaming platform Twitch. This Monday, through the group stage of the North American BLAST Premier Spring, 209 thousand simultaneous spectators watched MIBR defeat FURIA for the first time on Alexandre "Gaules" channel. This was the first time that a Brazilian broadcast exceeded 200 thousand viewers. In early May, the streamer reached 182 thousand with the confrontation of MIBR and FURIA, at ESL One Road to Rio.

FURIA is a Brazilian eSports organization formed in 2017, which has a Counter-Strike: Global Offensive (CS: GO) team and competes in the biggest championships in the world. The Brazilian team, which has great supporters on social networks like Neymar Jr and André Akkari, competed for the first time at IEM Katowice 2019, one of the biggest championships in the world, and the ESL Pro League. FURIA has already become one of the fastest growing organizations in the eSports market. The company also stands out for the huge involvement of its fan base and for its unique way of creating exclusive content like FURIATV, the largest streaming channel owned by an electronic sports club in the world.

MIBR (Made in Brazil) is a Brazilian organization that operates in the competitive scenario of Counter-Strike: Global Offensive (CS: GO). The team, which was created to compete in the original version of Counter-Strike, was active during the years 2003 to 2012, when it officially left the scene. MIBR was the first Brazilian team to compete and win a CS world cup and it was the name that inserted Brazil in the competitive scene of the game. In 2018, MIBR was acquired by the American electronic sports organization Immortals (currently Immortals Gaming Club).

Yesterday, FURIA announced its new partnership on social networks. AOC, a manufacturer of LED displays for computers and televisions based in Taipei, Taiwan, is the latest sponsor of the eSports team. On Instagram, they wrote: "The FURIA family has just gained even more strength. Now at 240Hz 0.5ms, we announce our newest partner. WELCOME, AOC!"