Draws will be weekly

Caixa Econômica Federal was authorized by the Brazil’s federal government to launch a new lottery product, the 'Super Sete', according to an ordinance published this Friday (26) in the Federal Official Gazette. The draws will be held weekly and the date of the first one will still be defined through Caixa. Betting prices were also not disclosed at the time. 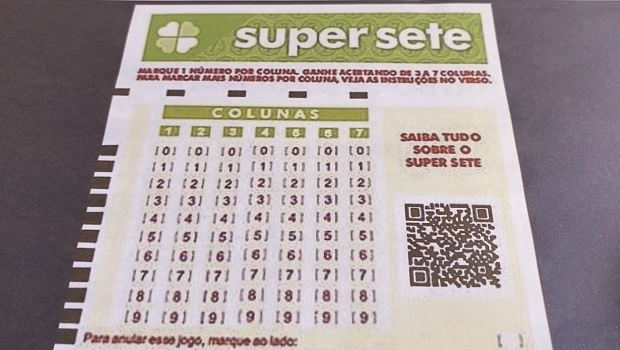 The launch of the new lottery was expected in April but it was delayed due to the pandemic of the new coronavirus. The ordinance signed by Waldir Eustáquio Marques Júnior, Undersecretary of Prizes and Draws of the Ministry of Economy, comes into force on July 1st and, thus, “Super Sete” should be marketed in the second semester of the year.

The new modality "consists of the indication of a finite set of predictions over ten digits, which will be broken down in the matrix of the disclosure form or in the matrix of the electronic bet, organized in vertical order, in seven columns, upon payment of an amount corresponding to the amount of bets placed," informs the ordinance.

The bettor will be able to choose at least 1 number and, at most, 3 among the 10 digits contained in each of the 7 columns shown in the betting wheel matrix.

For each bet on the "Super Sete", the minimum total of 7 numbers will be required and the maximum total of 21 will be allowed, in the set of seven columns.

It will be possible to choose numbers or allow automatic filling in with the "surprise" option provided by Caixa. It is also allowed a bet with repetition of numbers between columns.

The draws will be held weekly. The date of the first "SuperSete" draw will still be defined by Caixa. Betting prices were also not disclosed at the time.

The ordinance further establishes that, for purposes of commercial appeal to the public, Caixa may also adopt the name "Super Sete", "Super 7" or "Super VII", to identify the new lottery product.