Winner will be known today after final game

Sportsbet.io rewards with a PS4 the simple bet on biggest odd’s in Fla-Flu

The Sportsbet.io site will give a plus to the games played in today's (Wednesday) match between Flamengo and Fluminense that will decide the 2020 champion of Rio de Janeiro. The player who makes a simple bet on one of the biggest odds, in addition to the cash prize, will take home a PlayStation 4. Interested parties must follow some simple steps to participate. This will be the decisive game, after Flamengo’s victory (2 to 1) in the first one. Ball rolls at Maracanã at 9pm. 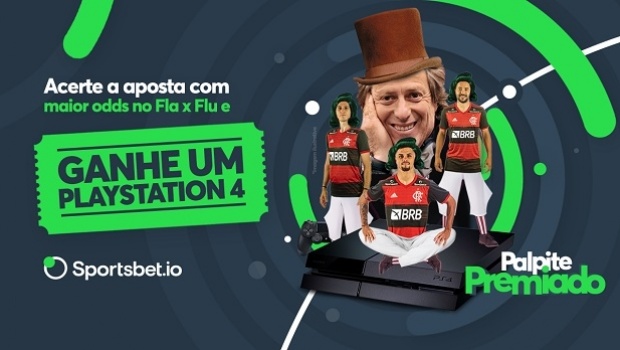 To publicize the promotion, Sportsbet.io made a post on social media stating that it would not be left out of the state's tournament definition and that to alleviate boredom at home, since the fans are isolated due to the COVID-19 pandemic, will give a PS4 as an extra prize.

“Today there is the Carioca Championship final and of course Sportsbet.io would not be left out! How about getting something to relieve boredom at home? Let me tell you more: if you get it right, in the Carioca final, the PS4 is yours!”, says the bookmaker's post.

To participate users must follow a few simple steps:

This Wednesday's match between Flamengo and Fluminense is the second one of the Carioca Championship final. In the first, Flamengo won 2-1 with goals from Pedro and Michael; the young Evanilson, scored for Fluminense. So today, Flamengo goes to the game with the advantage of a draw, while Fluminense needs a simple victory to take the game to penalties or by 2 goals win the title in the 90 minutes. The ball rolls at Maracanã at 9pm.

This is yet another promotion carried out by Sportsbet.io to shake users' lives. The operator has already drawn a Lionel Messi jersey to celebrate the return of football during the pandemic, and it has already taken a basketball fan to watch on the spot with youtuber Cauê Moura the match between Clippers x Lakers at Staples Center.

In addition to promotions, the operator also generates several actions for the Brazilian public, such as lives with brand ambassador personalities, advertising on signs during football games in Brazil and a sponsorship partnership with Flamengo.

Sportsbet.io is the largest sports betting site in Bitcoin and other cryptocurrencies, it was founded in 2016 and has become increasingly known by Brazilians. The platform is part of the Coingaming.io group and currently has over 350,000 pre-game betting options. The platform broadcasts several sports live, many with frequent promotions, to encourage public participation.