BtoBet’s founder Alessandro Fried was recently interviewed by G3 Newswire about the current station of the Latin American online betting market, its future potential and the plans of the company in the region. In this scenario, he highlighted the possibilities that offer Brazil “with a population of 210 million and a clear propensity for gambling and a huge sporting culture.” Waiting for its regulation, Fried mentions that currently “the local industry is greatly targeted by grey market operators.” 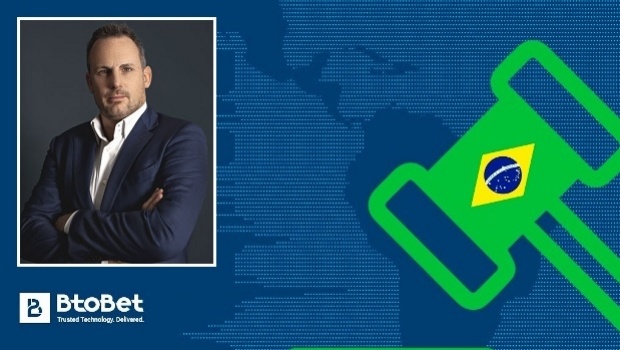 G3 Newswire - The sports betting industry is underdeveloped apart from in a small number of countries in Latin America such as Mexico and Panama. Sports are hugely popular in Latin America but why is retail and online sports betting taking so long to take off in this region?
Alessandro Fried - Whilst Latin America has perennially generated a general nod of consensus regarding the immense potential that its sports betting industry keeps in hold, truth is that generally speaking the region still lags behind more mature scenarios, such as Europe, in terms of infrastructure but especially in terms of regulatory frameworks already in place. However, it is important to note that the regularization of the industry in Colombia in 2017 has put in motion a willingness from all the different local authorities to shift their stance in favor of regularization. The imminent regulatory framework that is set to be implemented by Brazil is dominating the industry’s agenda and I expect this to have a domino effect on all those countries that are still pondering about regularizing the industry.

But apart from the regulatory aspect, one must also concede that the region also lags behind other markets in other aspects, such as internet and smartphone penetration, and financial inclusion factors, which are key traits especially for the online industry. Also from this aspect, luckily, the region has been registering consistent and strong year-on-year increments under all perspectives, and we have witnessed this directly with our increasingly growing partner portfolio in LatAm.

There are a number of important exceptions such as Brazil which offers huge opportunities. How do you see the Brazilian market developing moving forwards?
Brazil, and rightly so I must say, is set to be the dominating market in LatAm and one of the most prominent from a global perspective. And this is confirmed by the numbers themselves, with the country having a population of 210 million with a clear propensity for gambling and a huge sporting culture.

Whilst up until now the local regulated sports betting market is limited to horse racing, the local industry is greatly targeted by grey market operators. Nonetheless, whilst the size of the offshore market is up for debate, a report commissioned by the Remote Gaming Association (RGA) and conducted by KPMG in late 2017 estimated the offshore online grey market to be worth $2.1 billion annually in GGR terms. This is only an indication of how much a local regulated market will be worth.

What is the overall potential of the sports betting market in the region?
Reports indicated that the Latin American online betting market would be worth more than USD 2 billion by the end of last year. That is more than three times as much as Southeast Asia, which is experiencing a huge gambling boom.

With the invention of the Internet, online casinos, lotteries, and games have appeared and are available to almost everyone. According to a report developed by Verified Market Research, the global online gambling and betting market was valued at USD 49.63 billion in 2018 and is projected to reach USD 114.38 billion by 2026, growing at a CAGR of 10.94% from 2019 to 2026.

As in the whole world, in the Latin American region the online betting market is experiencing significant growth. The progression of online bookmakers is increasing and in certain population groups there is an important breeding ground: it is fundamentally young people who are more attracted to the appeal of the entertainment provided by the industry.

Latin America has experienced in recent years a good consolidation of the economy in different countries. While it is true that there are still regions that experience some instability, most countries in the region are very stable and prosperous at the economic level. This has aroused the interest of large online betting houses in the region, as they see that there are more and more people who have the necessary capital to place bets online.

Could you please tell us more about about BtoBet’s plans for the region?  What role will Neuron 3 play as part of your strategy in the region?
BtoBet boasts of a very strong presence in LatAm across all regulated markets. Nonetheless we are always monitoring the evolving regulatory situation and foresee further expansion from our part especially once the Brazilian iGaming market becomes regulated. The reputation and the trust that we have built lies primarily in the expertise and knowledge of the differing local market contexts, and also in the technological acumen at the core of our Neuron 3 betting and gambling platform.

Our localized approach, both in terms of optimization of the platform itself to meet the local requirements, and also as regards content and payment gateways readily available at native level ensures a more tailored and unique experience reflecting the local players’ preferences and behavior, putting our partners in a position to build their brand according to their strategy and reap successful results in the least time-to-market. The latter is particularly essential when it comes to entering a newly regulated market, such as Brazil once regulated.