"It is necessary to establish gaming in Brazil, but not from casino-resorts"

In yet another meeting of GMB’s One-On-One, Gildo Mazza talks to the Brazilian Marcus Fortunato, CEO of TicTabs, who tells a little about his career in the gaming world, the success achieved in the American market and his vision of regulation activity in Brazil. For the businessman, the country should not see IRs as a tool for attracting tourists. “When we talk about going to a casino, we talk about going to a restaurant or a bar. The casino must be seen as a leisure space.” 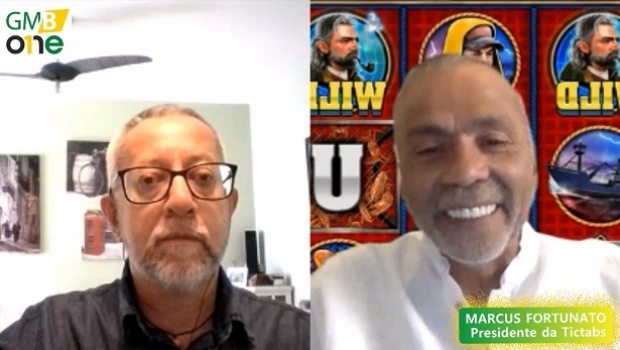 TicTabs is an American company with Brazilian DNA, founded by Fortunato. In addition to developing games for its own equipment, TicTabs makes games available to third parties and currently has a library of more than 160 titles, running on more than 7,000 machines, both its own and those of other manufacturers. "Our first manufacturer license was in the state of Maryland and then we expanded to Virginia and today I have machines approved in Georgia, Kentucky and Oklahoma," he says.

Check out the main parts of the interview:

GMB - Marcus, we would like you to introduce yourself to our readers...
Marcus Fortunato - My trajectory is a little different from the normal ones of the gaming industry. I'm from Rio, but I've been living in the United States for 42 years. My career started as a business restructuring consultant, which took me all over the United States, I lived in Australia, Malaysia and New Zealand. Around 1990 I decided to remove my tie, because I wanted something lighter. I moved to Las Vegas, since I had a brother living in the city. At first it was just a vacation, but I ended up entering the gaming industry as a craps croupier at the Western Hotel Downtown Las Vegas. My career lasted eight days because I discovered that I didn't make much money and that standing eight hours a day was not my business. I ended up going back to the consulting area, which took me back to São Paulo.

In 1992, conversations started about opening bingo halls and I ended up becoming the owner of three bingos in Santa Catarina and two in Goiás. All of them, without exception and I am proud to say because it is part of my career, were a failure. I lost all the money I invested, because bingo was a failure due to little movement, little income and high cost of labor rights. But I opened a bingo at Pousada do Rio Quente, in Goiás. But then, something happened. Video poker machines have been legalized. Our bingo at Pousada do Rio Quente was the place where the first 47 legal machines arrived, which were from IGT, whose games I had the pleasure of helping them to develop in Reno. Then I became a machine operator. It was a new branch for me, and I discovered with my employees how it all worked. It was a hard start. After a year I was invited to be vice president of Sodek do Brasil, the first company that brought legal video bingo machines to Rio de Janeiro. At that time, 100% of the machine floor at Bingo Arpoador was ours. When Sodek decided to leave Brazil, I bought, together with some partners, the Brazilian division of the firm. That's when my most prosperous gaming career began. With the coming and going in Brazil, we expanded the operation in other states, but in 1998 I decided to return to the United States, keeping the company open and I was a pioneer and founding partner of FBM, being its first president. This went on for about seven years, when we had the pleasure of starting businesses in Mexico, the Philippines and operations in the United States. In 2008 I left FBM and founded TicTabs, this time just as a partner.

And how was this experience of starting a business? With what goals was TicTabs born?
I brought my employees and our idea was to set up a company to explore the American market using a little bit of Brazilian DNA. We wanted to give a new look to products in the United States with Brazilian creativity. Our first manufacturer license was in the state of Maryland and then we expanded to Virginia and, today, I have machines approved in Georgia, Kentucky and Oklahoma as well.

We are more focused on slots, as the American market is not yet of videobingo, unlike the Latin, who loves this game alternative. We were very successful, especially in Maryland with the pull tabs market, which is a slot with standard definition of results. We are leaders in this market today. It is a market of US$320 a day per machine. In other words, a highly profitable market with high taxes. As a result, my development team grew and I ended up being more involved with engineering than consumption.

We expanded to make games, mainly in graphics, mathematics, and programming, for other companies. TicTabs has already produced more than 60 games for third parties. I see our games in several Las Vegas casinos, which makes me very proud. These are games made by Brazilians that are successful in casinos such as Venetian, Wynn, Mandalay Bay. This is what Brazil does not know.

How do you feel about the current situation of the gaming market in your beloved Brazil?
I am a little disappointed with what happens in Brazil with regard to gambling. I see successful entrepreneurs, like Johnny Ortiz, from Zitro, who absolutely dominates Mexico with his competence, his prestige and his products, or Rui Francisco and Renato Almeida, from FBM, who are absolute in the Asian market. And even me, leading in Maryland. So, when it comes to gaming in Brazil and that the international market will bring wealth to the country, I don't believe that.

I think our business is done domestically with local entrepreneurs who understand the country's culture, people and politics. So, I think it is a very big mistake to discuss the establishment of casinos with resorts to attract tourists. I think that to attract tourists, you have to offer security. Gaming alone will not change the tourist reality in Brazil. I see the example of the Philippines. There, the player is local and so is the business. It is the third largest branch in the country and the money is local and stays there. When it comes to big resorts in Brazil, I think of the reality of Las Vegas, where I have lived for 22 years, and I realize that the local casinos are a tremendous success. Some talks about Singapore, but if there was a gaming market in China, Singapore would be bankrupt, as the country is not an example for anything in relation to Brazil. Singapore is an island full of buildings, powered by Chinese tourists who cannot play in their country. Nobody will go to Brazil to play.

Today, speaking of Las Vegas and the United States, how many machines in operation does TicTabs have and how many games installed on machines of other companies?
Our library has more than 160 games, still active or out of the catalog. It is a significant number. I estimate that among our machines and third parties, there are more than 7,000 in operation today.

How is it to develop and do all this business in the United States being Brazilian, that is, a native of a country where there is no gaming?
I was a little lucky in the sense that I am Brazilian, but I was raised in the United States. The gaming market sees me as an American with experience in Brazil. I use Brazil as a differentiator, because every American wants to find out what the Brazilian has, that they don't have in relation to gaming development. From the smallest game development company, with only three employees, to a firm like Zitro, you will discover something in common: creativity. Thus, the American in the gambling industry recognizes the road we walked. The big advantage is that here the law is very serious, everything is audited and extremely regulated.

When are you going to do business in Brazil? How do you see the process of gambling regulation in the country?
If you had asked this question ten years ago, I would have said that I was already packed and determined to move my company to Brazil. But unfortunately for some time now, it has been created a business for the gaming industry: THE TIME IS NOW. That kills the country. This information comes to my desk every year. I have children in the gaming world and today I work for them. I don't have much hope for an opening in Brazil soon. I find myself with my arms crossed and not wanting to beg half a dozen deputies to legalize what the majority wants. I do not believe that any Brazilian politician needs to be convinced of the benefits that gambling can bring to the country. This has already been said a thousand times. When they talk about crime and money laundering, I find it absurd. I don't know of any Brazilian company scandal outside Brazil today. Today I am retired from the fight without losing hope.

One day this will happen and we hope that you will do good business in Brazil as a Brazilian-American or American-Brazilian businessman.
It is a dream I have, but it was already a reality. Today I am a step back. I am hopeful that we have a regulated market. But I don't want to depend on good will, a very restricted group that doesn't even understand the gaming sector. I prefer a country that gives citizens the right to choose. Not everyone is going to play.

What is your final message for Brazil and for our readers?
Let's take it easy, open our eyes and stop fomenting the THE TIME IS NOW industry. Let's start pushing for legalization at high taxes and establish an industry that will last a lifetime. We must seek stability for both the entrepreneur and the player, taxation, employment ... Gambling alone won't solve our problems. We should be ashamed and understand that it is not for the next five years, but for our children and grandchildren.