Better payout, digitalization and private exploitation, the path to lottery modernization in Brazil

In the third webinar of the “Agora Brasil” cycle and with the support of Clarions Events, Altair Mendanha (Ministry of Economy), Roberto Quattrini (representative of IGT/SG for Lotex), Sergio Alvarenga (Intralot Brasil’s Board Chairman), Ludovico Calvi (GLMS president) and expert lawyer Roberto Brasil Fernandes discussed the future of lotteries in the country. They agreed on topics such as the importance of opening the business to the private sector, improved payouts, legal security, and digitalization so that investments bring modernization to the sector. See the complete broadcast here. 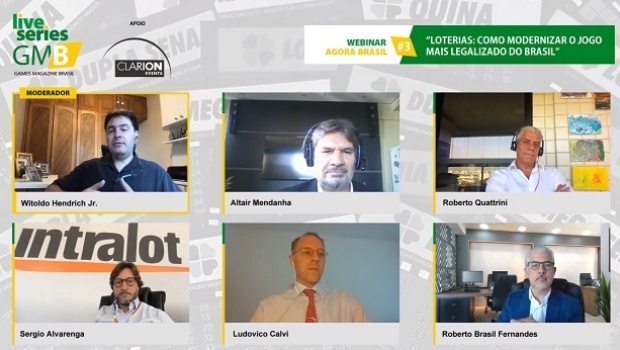 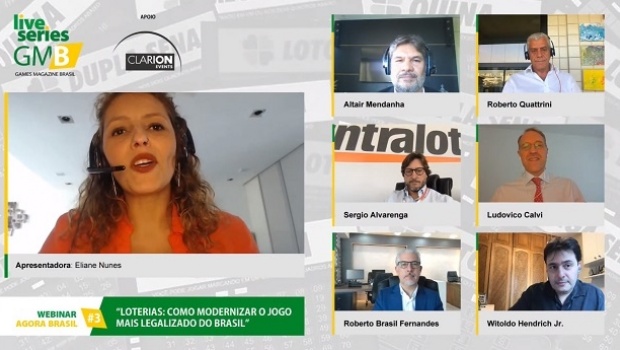 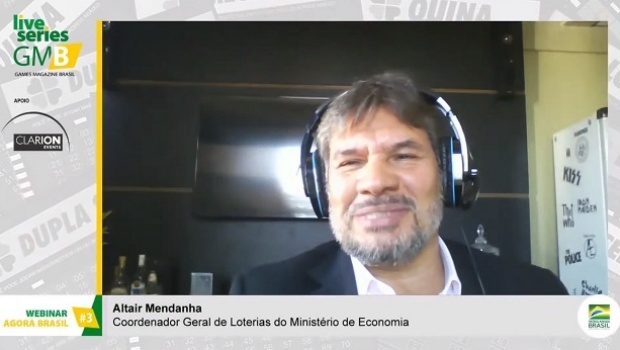 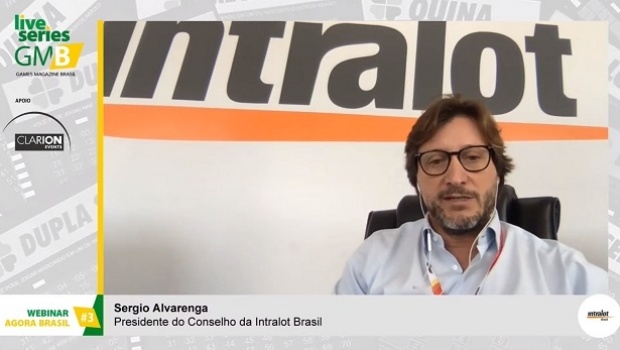 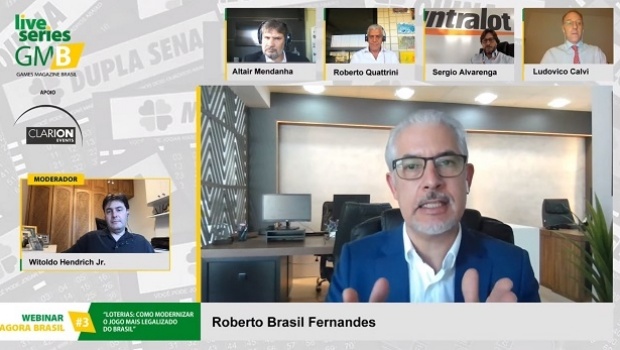 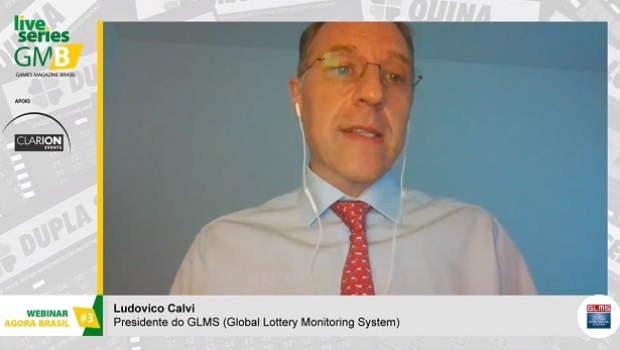 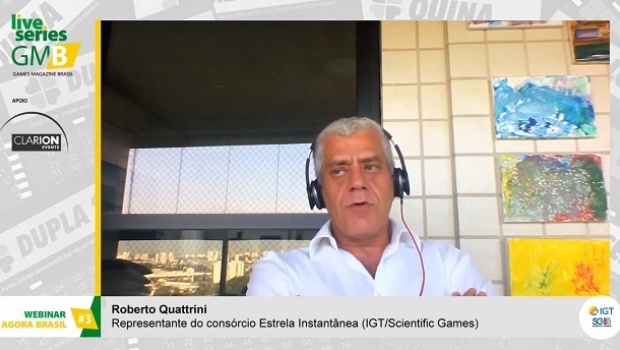 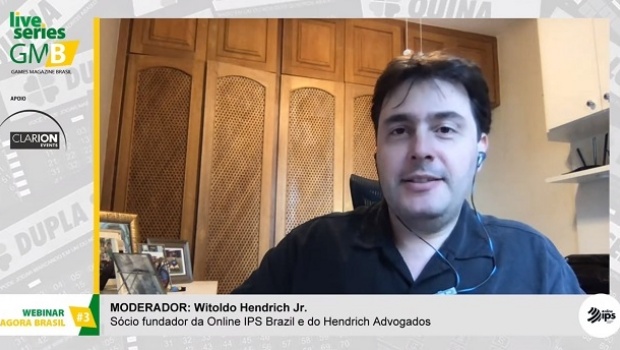 When welcoming the speakers and thanking audience that followed the webinar on social media, Carlos Cardama, CEO of GMB, recalled the importance of lotteries, as a playful activity that delights millions of Brazilians and has been a source of millionaire resources for the government, in addition to being responsible for social support. "Brazil needs to modernize itself in the lottery area, allow the operation by the states and ensure that more social aid, the primary function of the lotteries' existence, continues to bring prosperity to welfare entities", he said, also thanking Clarion Events for supporting yet another GMB webinar. 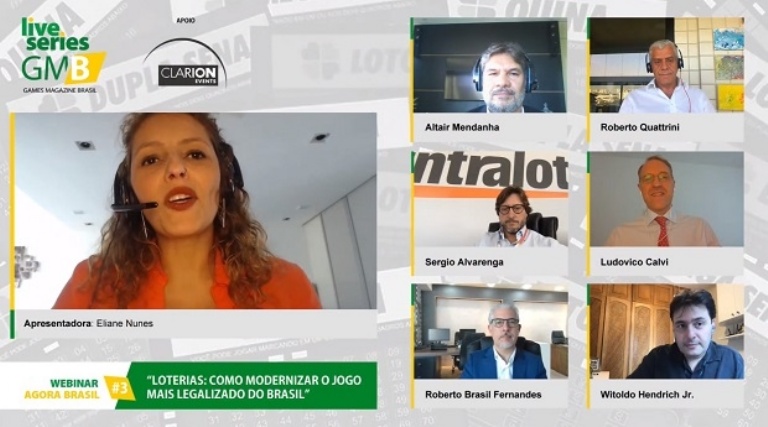 After Eliane Nunes (Clarion) introduction, Witoldo Hendrich Jr. greeted everyone and thanked him again for the opportunity to host the webinar. As could be expected, he commented that Caixa Econômica Federal held a monopoly until the arrival of Lotex, now in the hands of the private sector. “Caixa's power is dissipating, so I want to know how the government sees this, losing a slice of the business.”

Altair Mendanha, representing the Ministry of Economy, said that as a regulatory body, it does not see it as a loss. “The instant lottery was not active, so we didn't lose. Caixa is in charge of regulating and exploring the lottery business. As it was a product that had already been explored, it does not create a shadow over other modalities. This relationship is smooth and the winning consortium in the auction is in negotiations with Caixa to explore the distribution channels. It is a new dynamic, and everyone wins. Caixa is also victorious.” 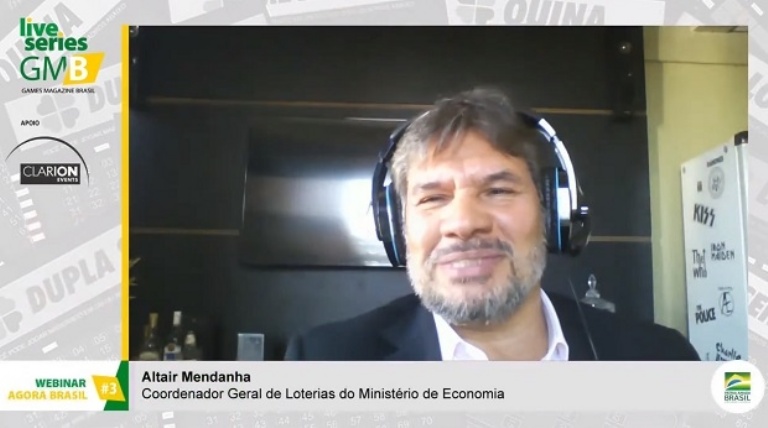 Moving on, Witoldo asked Roberto Quattrini about when Lotex will be launched. The consortium executive said that due to the pandemic, it was necessary to delay the start of the instant lottery. “I believe it will be possible to launch it between November and January next year. I would like to confess here the high professionalism that we find in the spheres of government involved in our process.” According to him, the instant lottery is not competing with other games as it has lower prizes but many extractions, which makes it a very interesting product. "We have very aggressive plans for Brazil and the new lottery will be very attractive to everyone," he said.

Regarding the legal aspect, Roberto Brasil Fernandes commented that the lottery is a public institution that has the power to regulate, inspect and tax the activity and that it can be exploited directly by the public authorities, or indirectly by the private initiative, through contracts with the Union or the States. Therefore, in Brazil the lottery has always been public, “but its exploitation can, under the control and inspection of the State, be in charge of a private company. It is a source of resources to serve social projects and needs to fulfill its objective and guarantee its existence, to have an economic result. The lottery in Brazil has had one of the worst economic results in the world in terms of demand x revenue for decades. In the last few years, from the management of Mansueto Almeida and his successors, there was an understanding of the importance of the lottery for Brazil and new modalities started to be discussed, analyzing new lottery models with society, as a regulatory body,". 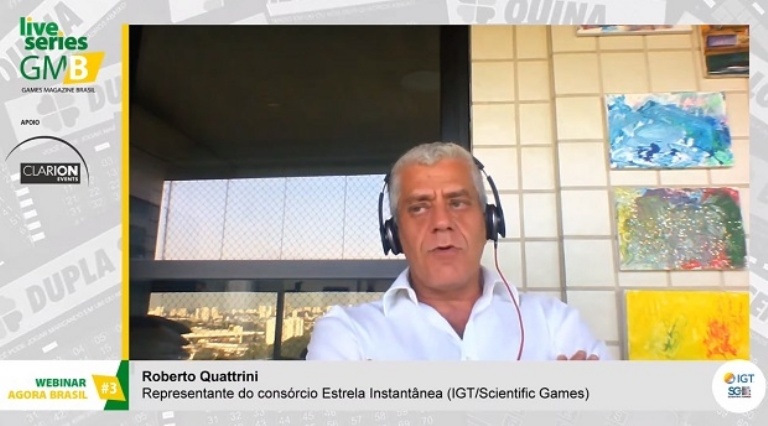 “In 2018, fixed-odd bets were legalized and Caixa's online lottery was launched. Such actions represent a significant advance. I think that there is little left for the regulation of sports betting and Lotex, but they are regulations that ensure economic viability, legal certainty for private investments and with bets allowed both on physical channels and online. All this takes place in a competitive environment, allowing the modernization of the activity,” he completed.

Ludovico Calvi commented that one of the great advances in the activity of games is the digitization that has been growing. “All operations can be done from a cell phone, and cybersecurity offers us everything we need so that everyone has an adequate relationship in view of the diversification of channels. We have to unite our customers,” he said, recalling that today private companies are entering a world until recently dominated by governments, which has promoted advances in the activity. 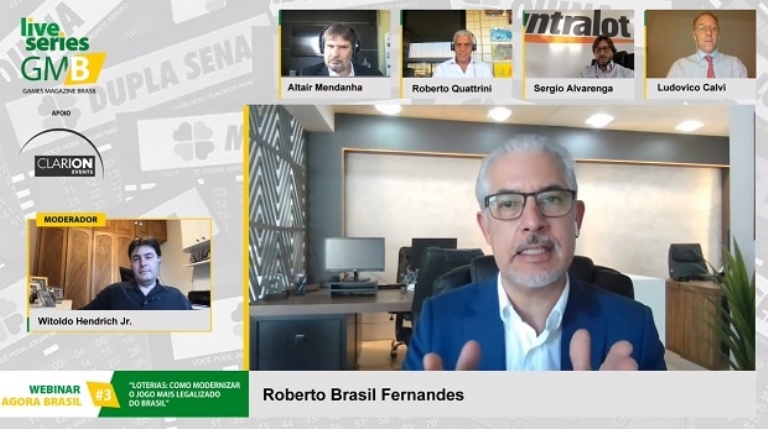 About technology, Witoldo questioned Sergio Alvarenga about the big changes in the Minas Gerais Lottery with the operation of Intralot, the challenges encountered along the way and the higher payouts than those practiced by Caixa. Alvarenga commented that for ten years he has been bringing online games to bettors from Minas Gerais and the biggest difficulty is finding a different operation. “Minas Gerais requires a complicated logistics operation and we have achieved this, in addition to showing locals the difference of not betting just on lottery shops,” he said.

Regarding technology, he commented that the operation required geolocation techniques and other ways of not operating outside the limits of the state. “In addition, our payout requires a minimum of 60%, which makes it compatible with operations in other countries. All over the world gaming is already seen as entertainment and this has been important for Intralot and for all the people from Minas, who were won by our offers.” Alvarenga stated that technology brought customers closer to Intralot. "As they are registered on our website, we talk to them all the time, understanding their tastes and interacting to continue serving them well with surprises," he also mentioned.

Roberto Brasil resumed the floor to remember that the Piauí State Lottery was the first to operate online in the country. "They have always been very efficient and this experience can serve as an example for the market," he said. 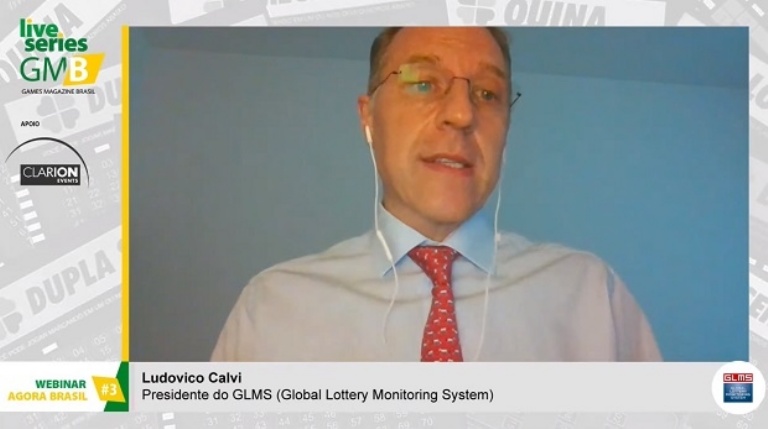 Witoldo questioned Altair Mendanha about peripheral competitors of the instant lottery, such as the popular local jogo do bicho and scratch cards based on capitalization plans. The representative of the Ministry of Economy said that the scratch cards was a concern during the Lotex auction process, but with Susep measures, the issue was resolved. “The illegal market itself must be fought. We have a great opportunity with fixed-odd betting to bring the illegal into the legal market. Government, market and bettor are the participants in a successful tripod for the activity,” he said.

Quattrini mentioned that when they decided to participate in the Lotex auction, he analyzed that illegal gambling would sooner or later be brought into law or eliminated by the government. “What is lacking is the same treatment within legal gaming. A capitalization bond does not pay a license or tax on the prize, that is, it is illegal competition for our activity. The permission for TV channels to be able to make draws did not determine rules and obligations. This can cause problems for regulated legal gambling in Brazil,” he commented.

Brasil Fernandes said that savings bonds drawings are highly taxed and follow rules, with control even by the Public Ministry and regulated by Susep. "Many hospitals might not be operating without the funds generated by savings bonds," he assured. 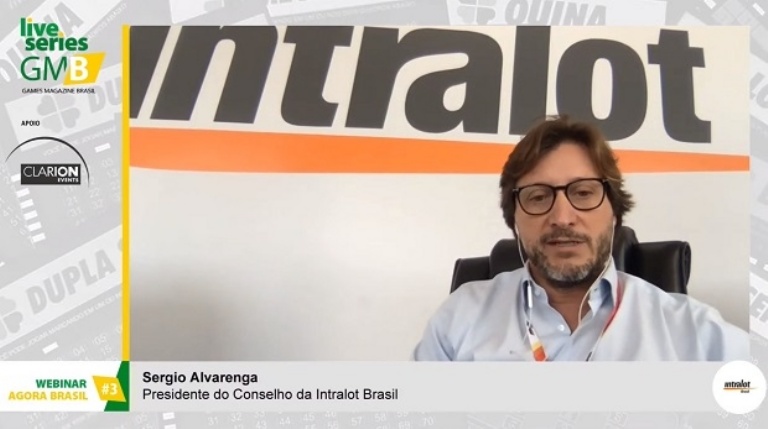 Still on illegal gambling, Ludovico Calvi said that it is important to create a scenario for the illegal market to enter for legalization. “Operators who today do not have a license need to receive the government's offer to enter the legal market, based on the regulation of the activity. The illegal sector has emerged and is attractive to bettors. The market must guarantee attractive offers to players so that they can bet on legal gambling. Payout is an important issue. In Italy, sports betting has always existed and when we legalized the activity, the rate was high, and the illegal market continued to grow. If the payout is adequate, the legal market becomes attractive to bettors. Today, the illegal market represents only 5% of gambling offers in Italy, thanks to the government's action to improve the payout for operations,” he explained. The next year, with the entry into operation of sports betting, could be a milestone for Brazil, in his assessment.

On player protection, Witoldo asked Alvarenga about the Intralot experience. "When the player is identified, you guarantee a series of security guards, such as combating money laundering and even more, that the player is not a ludopath,” commented Witoldo. Alvarenga said that the identification of players is done in online operations, but that it does not exist in physical ones. “The value of our bets is R$2 and can reach, with the multiplications, R$500. We do not have very high amounts and even the payment of prizes is done at points of sale, only for amounts below R$1,000. Above that, only with us, which guarantees the safety of the entire process,” he detailed. According to him, illegal gambling is a huge challenge.

“The jogo do bicho has been operating very well for over 100 years and will only be fought with legalization. It should be brought into legality, with the government raising funds from the activity. This is the only way to have a fully balanced market.” For Alvarenga, the reduction of taxes could contribute to the increase in payout and generate that more bettors come to the legal market, leaving aside bets on illegal activities. 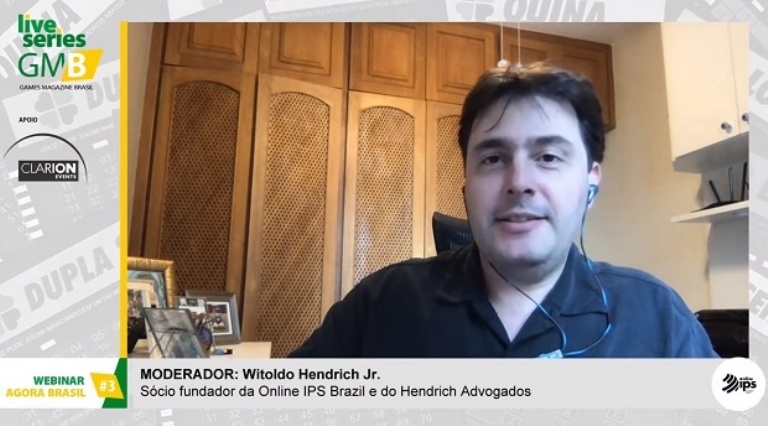 At the end of the webinar, Quattrini said that Brazil is doing the right thing. “After so many years, the Ministry of Economy and the government are putting in place important rules for the regulation of the gaming sector, with the primary objective of protecting the player. Everything requires time and Brazil is on a good path,” he said.

On how to modernize lotteries, Alvarenga stated that all companies in the sector are willing to come to Brazil, “but what we need is to remove the role of the government, because is not its focus to develop the lottery market. The products must be in the hands of the private sector and it is very positive to see the government's position to be willing to privatize the activity”.