Casa de Apostas, master sponsor of Esporte Clube Bahia in Brazil, temporarily gave up its space in the team’s uniform so that the logo of the Unified Health System (SUS) can be displayed, in a joint action of the club, the betting firm and the system. The initiative aims to honor health professionals who are at the forefront of combating the new coronavirus. In just one day, two thousand pieces of the uniform were sold. Any amount collected with royalties will be invested in materials for a SUS unit in Salvador. 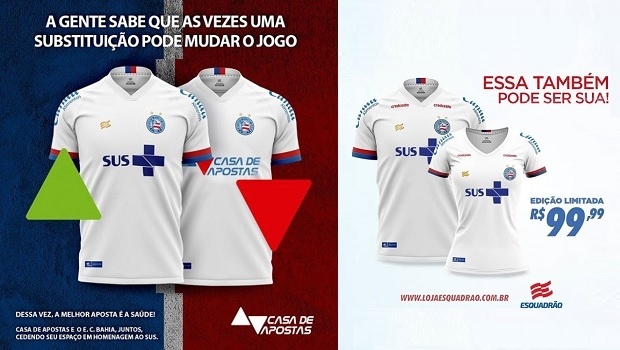 The jersey with the SUS brand displayed on the front bar was used in the match against Náutico. The ‘Tricolor’ thrashed the team from Pernambuco for 4 to 1 after four months without entering the pitch due to the pandemic of COVID-19. The club's idea was to honor the professionals who work at the forefront of the fight against coronavirus.

“Being a Master Sponsor of Bahia is not just occupying the noblest commercial space of this jersey. It means knowing how to walk side by side with the club and everything it represents,” said Casadeapostas.com on its social networks.

“For us at Casa de Apostas, it is an honor to give this space to SUS, the largest public health program in the world, which takes care of so many Brazilians. After all, in the fight against the pandemic, SUS is always a starter,” adds the company.

There were so many requests after the game that the club decided to put the fan model on sale on www.lojaesquadrao.com.br, at R$ 99 (US$19), with deliveries starting on August 20. Any amount collected with royalties will be invested in materials for a SUS unit in Salvador state.

According to the club's press office, a third of the shirts were sold to buyers outside Bahia, including people who do not support the club.

When announcing the sale of the jerseys, the president of Bahia, Guilherme Bellintani, promised that the amount collected with the royalties from the uniforms sold would be reverted in the purchase of materials for a SUS unit in Salvador.

According to the ‘tricolor’ communication advisory, royalties from the jersey represent 13% of the total value. Thus, Bahia will donate approximately R$26,000 (US$5,000).