It’ll be carried out online due to the pandemic

Brazilian MIBR team to compete in CS: GO’s ESL One Cologne in Europe

MIBR will compete in the European edition of the ESL One Cologne, which will be held online due to the pandemic. The Brazilian team of Counter-Strike: Global Offensive, who lives in the United States, will travel to Europe to do bootcamp and was invited by the organization to compete in the US$325k event. CS: GO is one of the eSports that has grown the most on betting sites and has been gaining space worldwide reaching more audience. 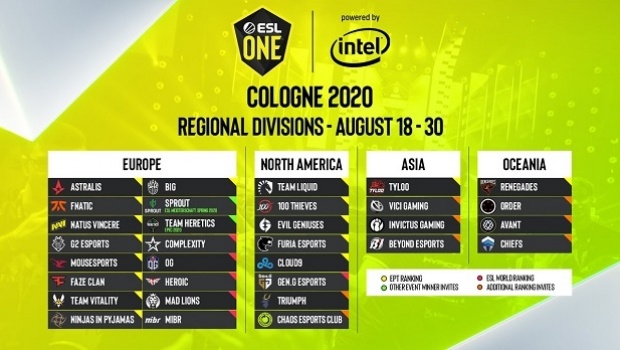 The recent awards given to players have surpassed the US$1 million mark. In addition, the teams have been professionalizing in Brazil and worldwide, becoming true champion teams. Athletes undergo intense training at games, with physical and psychological support and much more.

According to the organizer, the Brazilian team planned to compete in the offline qualifier of the event (which does not exist anymore due to the format change), had already prepared a trip during the period and even authorized Fernando "fer" and Vito "kNg" to return to Brazil thinking on going to Europe, since entering the United States has been "extremely difficult".

Contrary to expectations, ESL One Cologne will not mark the return of Counter-Strike: Global Offensive to face-to-face competitions. The Electronic Sports League (ESL) announced that, due to the pandemic of the new coronavirus, the competition will be transformed into an online and regionalized event with US$500k in prize money. The new ESL One Cologne will be played between August 18th and 30th and subdivided into four regional tournaments: North America, Asia, Europe, and Oceania.

The competition will have different prizes and numbers of participants according to the region. Europe will have 16 teams and US$325k; North America presents 8 teams and US$135k; while Asia and Oceania will have four teams and US$20k each.

In the new region, MIBR will join Astralis, Fnatic, NAVI, G2, mousesports, FaZe, Vitality, NiP, BIG, Sprout, Heretics, Complexity, OG, Heroic and MAD Lions. The competition takes place between the 18th and 30th of August and the teams will be divided into two groups, which will be played in a double elimination format and all games in a series best of three. The best four of each key go to the playoffs, played in simple elimination and md3 - with the exception of the grand final: md5.

The invitations were based on a regionalized version of the ESL Pro Tour rankings, the ESL Pro Tour Challenger competitions and the ESL world ranking. Some participants have already been announced, while others will receive calls according to their ranking in the July 20 update of the ESL ranking. With the change, the event will no longer be a grand final of the ESL Pro Tour but will distribute as many EPT points as possible for an online competition.

In North America, the original region of Gabriel "FalleN" and company, the list has also been defined. The Brazilian FURIA will be joined by Team Liquid, 100 Thieves, Evil Geniuses, Cloud9, Gen.G, Triumph and Chaos. The competition takes place between August 18th and 29th and the prize is US$135k. The event also has divisions in Asia, with TyLoo, ViCi, Invictus and Beyond; and in Oceania, with Renegades, Order, Avant and Chiefs. The two divisions have a prize of US$20k and will be held between August 25 and 30.

ESL One Cologne is one of the most traditional events of CS: GO and was scheduled to take place in Cologne, Germany, with players in the studio and without the presence of the public. The remainder of the award, which fell from US$1 million to US$500k, will be distributed equally between IEM Katowice and ESL One Cologne in 2021.