The Association of Employees of Hotels and Similar of Rio de Janeiro (AEHSRJ) published on its social networks a post explaining the reasons of why Brazil need to legalize gambling. For the entity, there is a strong hypocrisy in the country about the ban on casinos and bingo. 'We are talking about 300 thousand direct jobs and the growth of tourism on average by 50%, if the activity is allowed,' says Calixto Souza, interim president of the association. 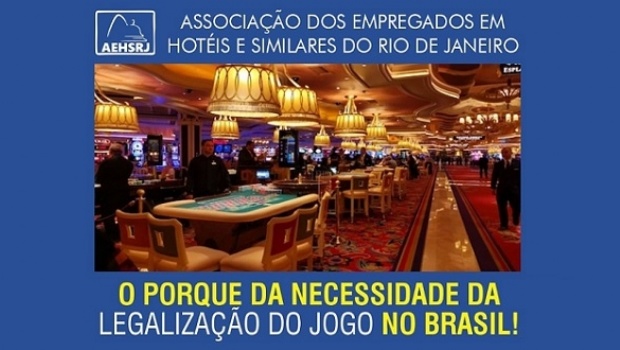 As interim president of AEHSRJ, Calixto Souza stated about the importance of gambling regulation in the country. “Regarding the legalization of casinos and bingos, there is a real hypocrisy of those who speak out. The tourist ships that come here in Brazil earn fortunes with casinos on the Brazilian coast. Singapore became another country after the establishment of these kind of venues. We are talking about 300 thousand direct jobs and the growth of tourism on average of 50%,” he argued.

According to Souza, this would be an opportunity to bring more entertainment to the population while generating thousands of jobs. “The bill is being processed in the Senate and must go to vote at any time. Those who play in casinos are the middle and upper class. The poor have the opportunity to have their return to the job market,” he says.

In a post published on AEHSRJ social networks, the association published a text from Gazeta do Povo explaining the necessity of gambling legalization in Brazil:

“The need to stimulate economic activity after the coronavirus pandemic has become an argument for members of the government and Congress to defend the legalization of gambling in Brazil. Tourism Minister Marcelo Álvaro Antônio is enthusiastic about the idea. He defends the establishment of casinos in the country as a way to reactivate tourism, one of the sectors most affected by the health crisis. But this is not an easy discussion.

By the end of last year, the proposal for legalization caused controversy between supporters of President Jair Bolsonaro and returned to be an issue in the Chamber. A bill with a report presented in 2016, authorizing the exploitation of games of chance throughout the national territory, is ready for voting in plenary. Álvaro Antônio even mentioned the casinos, although recognizing that the matter is controversial, at the ministerial meeting on April 22, made public after a decision by Minister Celso de Mello of the Supreme Federal Court. The Ministry of Tourism now has to have a planning, an investment attraction plan, which is what generates jobs and income: it is what helps, obviously, the economy of Brazil.”