Betsul, one of the best sports betting sites in South America, broadcasts LIVE the return of the NBA season, in partnership with Sportradar, starting yesterday (July 30), through its platform. The broadcasts are made available to all bettors who have active registration and balance at Betsul, without restriction of minimum credit amount. The brand has invested heavily in broadcasting live games during the global pandemic. 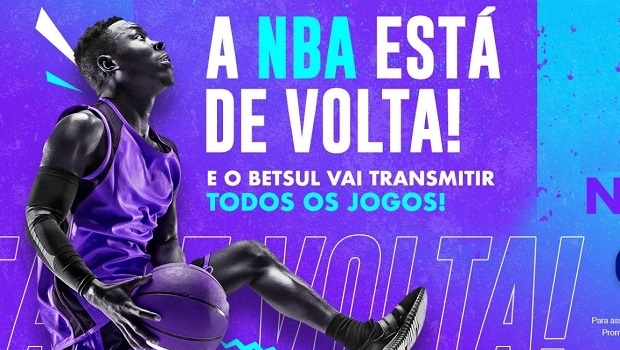 To follow the games live and place new bets, users just need log in to the website, access the basketball page and choose the NBA game they want to watch. The broadcast will be available on the LIVE tab of the chosen game.

The brand has invested heavily in broadcasting live games during the global pandemic. “This is a milestone for Betsul and a great victory. Initially, right at the beginning of social isolation, we included the eSports modality in our offer. In May, with the gradual return of football, Betsul saw the opportunity to bring its users the streaming service, celebrating the return of the first championship to the pitch, the Bundesliga, in partnership with Sportradar,” recalls and celebrates the CEO of Betsul, Fernando Rivas.

Negotiations and business vision continued with the support of Stats Perform for the broadcast of the Portuguese championship, the Primeira Liga, and the Spanish, La Liga. There was also the broadcast of the Russian Premier League of Football, again in collaboration with Sportradar, in addition to the return of the Santa Catarina Championship, in agreement with TNSports.

In addition, Betsul recently signed a partnership with TV network SBT (Brazilian Television System) to insert videos and advertising spots during the games of the Northeast Cup. The videos were presented by the athlete and website ambassador, Falcão, who had his contract renewed for another 3 years with the brand during the pandemic.

In addition, the brand made official this Wednesday (July 29) the sports sponsorship of Ponte Preta. “The contract had been signed moments before the pandemic, but, with the forced pause of the championships, it was impossible for us to make the announcement as required by the costumes. Finally, we are here more united than ever and wishing to announce all the new projects that were shelved. With all the challenges, this is still a great year for us,” reveals Fernando Rivas.