In a “Age of the Gods Norse King of Asgard” game

The European bookmaker Stoiximan / Betano, which recently announced the release of its version for the Brazilian market, reveals that a debuting player has won a jackpot of €818,655 with just 20 cents on its website. The lucky guy was a 30-year-old Greek who, last Sunday (26) after a game of ‘Age of the Gods Norse King of Asgard’ won this spectacular prize. His plans for the money include buying a car, make a trip and save to guarantee his family's future. 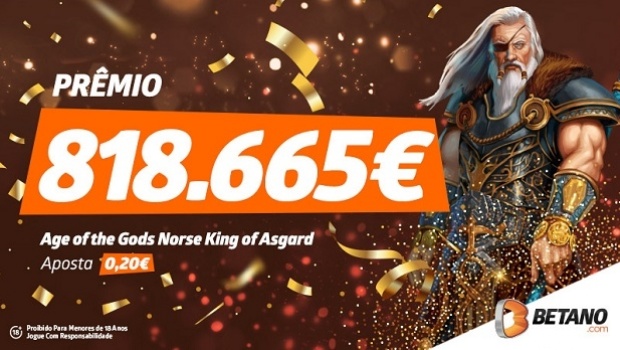 The bettor saw a story from the Stoiximan / Betano Casino about the Premier League and decided to play a bit to relax. He accessed the house application, logged in, took a look at the sports betting market and decided to go to the Casino section. With €4 euros in the account, he opened the Jackpot slots for the first time. In the third try, after a bet of just 20 cents, a jackpot image appears on the screen and he won more than 818k euros.

The scenario above looks like part of a movie but it actually happened at the brand's online casino. The lucky guy was a 30-year-old Greek resident of Crete, who decided to try his luck last Sunday (26), after a game of ‘Age of the Gods Norse King of Asgard’ at Casino Stoiximan / Betano.

After the victory, the Greek was so impressed that he called Betano's support to confirm what happened. Among the plans for this money are the purchase of a car, a trip and savings to guarantee the family's future.

Betano Casino distributes thousands of euros every day to its players. In addition, the user can also benefit from some exclusive promotions and bonuses such as “Win A Beest”, “Gonzo’s Quest Megaways” and “Street Racer™”.