In a new demonstration of the unconditional support of the betting site to Brazilian football, estadium.bet closed an agreement with Ceará to become master sponsor until December 2022. The German betting site maintained its deals with the clubs despite the pandemic and now it expands with this new contract. The club made the official announcement with a video on Twitter that quickly became TT with star Rafael Sobis presenting the jerseey with estadium.bet’s logo. 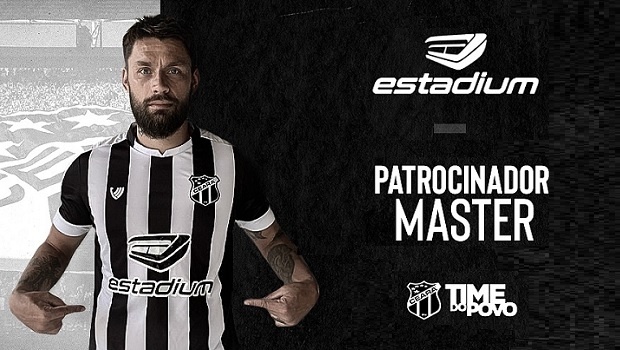 Ceará has a new partnership. The online betting platform estadium.bet signed a contract with the “alvinegro” until December 2022 and will display its brand on the main space of the uniforms during games, as well as training and travels, and also with inserts on the backdrop of collective interviews and pitch boards.

The announcement of the new partnership was made by President Robinson de Castro, on the afternoon of this Friday (3), in a collective statement to the fan-partners. “Even in a pandemic period, there is a time to celebrate when two major brands come together with a single objective: to prosper! You can bet, let's go to Estadium together,” he guaranteed.

Based in Germany and present in 16 countries, estadium.bet remains in Brazil despite the crisis generated by the pandemic in the entire betting market and now seeks to continue expanding its reach with new partnerships in the promising local football market. "We are very happy to establish this partnership with Ceará Sporting Club," celebrated Claudinei Bettioli, director of estadium.bet.

“It had been a long time since we wanted to sponsor Ceará. They have a passionate crowd, a model institution, and a very serious leadership with which it was a pleasure to negotiate and reach a deal. The madness that the news generated on social networks demonstrates the passion with which football lives in this club,” added Bettioli to Games Magazine Brasil.

estadium.bet is one of the companies that has invested the most in national football. In addition to the master sponsorship agreements with Atlético – GO and Santa Cruz, the company also supports Vila Nova, and Goiás.

On Friday afternoon, the fans of Ceará were caught by surprise by the marketing department of the club. An audio by Rafael Sobis was leaked on social media, where the striker said he was in the process of wearing a new shirt, which raised speculation about his future. On social networks, the player made an enigmatic post on the topic and shortly after the club said that President Robinson de Castro would speak at a press conference.

In the late afternoon the mystery ended. It was all a joke and it was announced that Sobis' 'new shirt' was Ceará's master sponsor, estadium.bet. In just one hour, the video of the team's star with the jersey and logo of the new sponsor totaled 10,500 and became TT (trending topic) in Brazil on Twitter.

In addition to the money for publicizing the brand, Ceará will also have a percentage, undisclosed, of the bets placed on the site by fans.

“We are very happy with the partnership with estadium.bet as our Master sponsor until December 2022. This demonstrates the power that the work together of Ceará SC and its fans can give back to the Club and its partners,” evaluated Lavor Neto, director of marketing and communication of Ceará.

With affiliate programs, betting terminals, high limits and no player blocking for high winnings, estadium.bet aims to make betting as simple as possible, giving customers more time to bet and the game itself, focusing on stable and fast odds.”