The latest report published by the National Commission of Markets and Competition (CNMC) positions online gaming as one of the sectors with the highest volume of business in electronic commerce in Spain with 3.9% of total turnover during the fourth quarter of 2019. With a year-on-year increase of almost 25%, the sector is the second with the highest percentage of e-commerce transactions. Fifth place represents a turnover of € 521.2 billion. 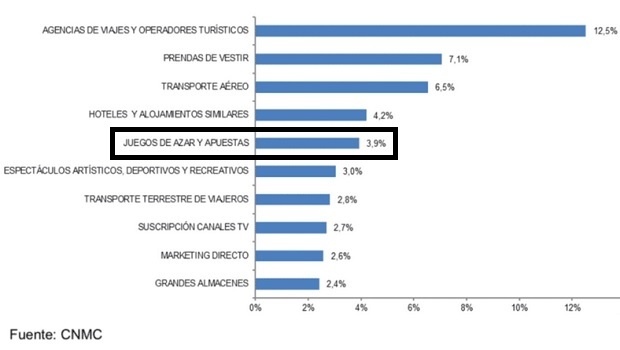 The CNMC places the Games of Chance and Gambling category among the activities with the highest percentage of turnover in the fourth quarter of 2019, which reflects the market situation before the crisis generated by COVID-19, occupying the fifth place. At the same time, the sector ranks second among those with the highest percentage of Electronic Commerce transactions, in this case, only surpassed by ground passenger transport.

By segments, the fifth place in the gaming category represents a turnover of €521.2 billion.

In general, the activity sectors with the highest income have been travel agencies and tour operators, with 16.5% of total turnover; air transport (10.1%) and hotels and similar accommodation, in third place (5.5%). Clothing is in fourth place and games of chance rise from sixth to fifth place, with 3.9% of the percentage of turnover.

The data released with respect to the period, focused on the market situation before the Alarm State caused by the COVID-19 pandemic, reflects that the turnover of electronic commerce in Spain increased during the period by 23.5% year-on-year reaching €13.3 billion.

The gaming sector is also among the branches of activity with the highest volume of business from Spain abroad, occupying fourth place with 5.7% of transactions, behind air transport, hotels and clothing.