End of Grêmio’s curse at Libertadores turns 3 and is featured on Betfair.net

The outcome of a curse of four editions with eliminations in the round of 16 of the Copa Libertadores is remembered by Grêmio’s fans in the second episode of the series “Todo Resultados É Possível” from Betfair.net, international bookmaker and official partner of main CONMEBOL tournaments. Journalists and brand ambassadors, Mauro Cezar and Chico Garcia, recall the emotion that marked the turnaround of Renato Portaluppi's team in 2017. 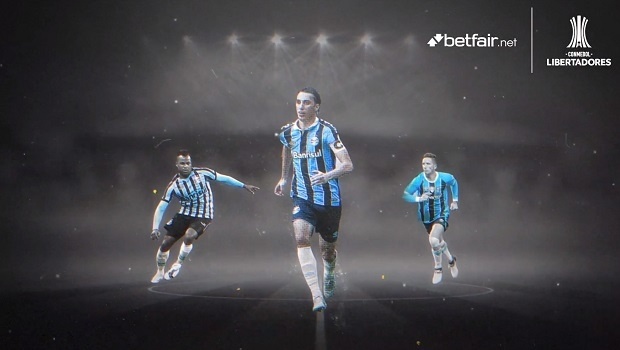 Since August 2019, when the brand was displayed for the first time on the pitch advertising boards of the match between Grêmio and Palmeiras in Porto Alegre, Betfair has set foot in South American football becoming official sponsor of both the Copa Libertadores and Copa Sudamericana for the next 4 years. The series “Todo Resultado É Possível” (All Results Are Possible) will make fans remember eight memorable moments of the competition, when football broke the prognosis and showed why it is the most popular sport in the world.

Renato Portaluppi's team 2-1 win over Godoy Cruz (ARG), in Porto Alegre, with an exciting turn that paved the way for the third championship in 2017, turns 3 today.

“It was a trauma, a stage to be overcome and that bothered me, because the club had a difficult period. It was 15 years without titles beyond the borders of Rio Grande do Sul. An uncomfortable series ended in 2016 with the conquest of the Brazil Cup, under the baton of Renato Portaluppi, who took the tricolor back to the biggest competition in the continent. In 2017, it seemed that history was repeating itself, when the team lost to Godoy Cruz by 1 to 0,” recalled commentator Mauro Cezar.

After a 1-0 victory in the first leg, with a goal by Ramiro, the atmosphere at Grêmio was optimistic with the classification at home. But, in front of 38,000 fans at the Arena do Grêmio, confidence turned into fear right at the start of the return match. The fate of the round of 16 still took the Gremistas' sleep away.

“Grêmio came from a curse in the round of 16 in recent years. Even winning away, when it conceded a goal at home and lost the advantage, all that apprehension took over the Arena in Porto Alegre. The second game reinforced the strength of that squad, with the goals of Pedro Rocha and the key participation of Lucas Barrios. It was a feeling that that year the outcome could be different,” said Chico Garcia.

Early on, goalkeeper Marcelo Grohe had to make an important save. And the Argentine team opened the scoring in the 13th minute, with Javier Correa pinching the post, making the scenario even more dramatic.

The scare left the group on alert. At 28, Luan, on the right, tested goalkeeper Burián, who left the ball near Gremio’s Lucas Barrios. Attentive, the striker passed to Pedro Rocha to seal the tie. The turn came in the second stage, at 14 minutes, again with Pedro Rocha, hero of the classification. From then on, the team beat Botafogo, in the quarterfinals, Barcelona (EQU), in the semifinal, and Lanus-ARG, in the final game.

“Immortal achieved a historic turnaround. Pedro Rocha shone with two goals and declared a 2 to 1 triumph, which packed the squad to win that edition, breaking an uncomfortable story,” said Mauro Cezar.