Manchester City is the one that pays less

The revolution that generated the announcement of the possible departure of Lionel Messi from Barcelona in the world of football is unprecedented. With the intention of leaving the ‘culé’ institution, main worldwide bookmakers began to guess with those clubs in which the Argentine could play next season. Betfair and William Hill compiled a list of more than 15 possible destinations. The arrival of the star at Manchester City pays only 2.50 per euro wagered. 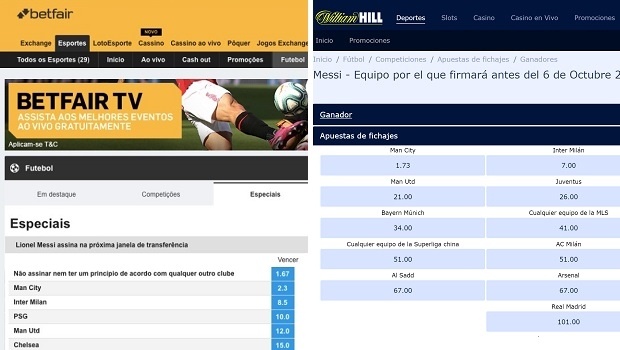 Bets in the United Kingdom see Leo Messi as the imminent new star of Manchester City after the Argentine has communicated to FC Barcelona his immediate desire to leave the Camp Nou, as reported by the Spanish sports press. That the fate of ‘La Pulga’ are the “skyblues” with Pep Guardiola is the most prominent in Betfair and William Hill bets.

His arrival to the City pays only €2.50 per euro bet, a low fee that indicates a large number of bets in favor of this possibility, without discarding two options that in recent hours have gained weight in the forecasts: Neymar’s PSG and Inter Milan with Lautaro Martínez. Finishing with the Brazilian in the runner-up in Europe is paid at € 4 per euro bet. His arrival at Inter has the same fee.

More complicated, bettors believe, is that Messi joins Cristiano Ronaldo at Juventus, an option that trades at € 5 per euro bet, something more feasible, although not much, than his arrival at United (7.5 fee), Liverpool ( odds 15.0) or to Bayern Munich (odds 36.0). The forecasts do not see him in any MLS club (13.0) and even less of a return to an Argentine club (26.0). Neither of these two tournaments points out any particular team.

The list of options is extensive and resounding in one conclusion: Leo Messi will not sign for Real Madrid. That Messi's destiny is the ‘merengue club’ is the last of a long list with a very high quota that indicates very small options for such a bombshell. If Messi ended up at the Bernabéu it would be paid at € 151 per euro wagered.