In an unprecedented partnership, Rio Branco announced that it will be in the next edition of Pro Evolution Soccer (PES). The club signed an agreement with the game's developer, Konami, authorizing the promotion and participation of the club in the game to dispute the Brazilian Championship, counting on experienced players. The competition takes place on the Playstation 4 platform and will start in September. 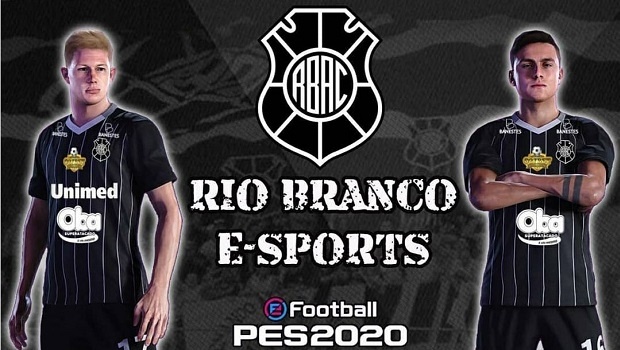 The ‘alvinegra’ team will have experienced athletes in the game. One of them is the director of the PES team, and also its captain, Leonardo Gomes. Fan of Rio Branco, the player highlighted the strength of the team assembled by the black-capped team to compete nationally. "We have the potential for that, we set up a team with strong players in the game,” said Leonardo, who previously played for Fortaleza e-Sports.

Currently, some other athletes are playing in the semifinals of an international championship. But it is important for the team to be in tune as the team's first competition is already in early September.

According to the club president, Luciano Mendonça, assembling the team is an action that will help expand the Rio Branco brand in the national territory. “eSports is a reality for major clubs in the country, such as Flamengo, Corinthians and Vasco. Our work will always be with the objective of strengthening the name of Rio Branco, and also being a giant in the world of electronic games,” he stressed.

The first tournament of the black-capped team in the game will be the Brazilian Championship in the X11 modality (eleven against eleven), which starts on September 5th. The Brazilian Confederation of Digital and Virtual Football (CBFD) has already confirmed the participation of Rio Branco eSports.

In this modality, each player controls an athlete individually within the game, simultaneously. The draw for the games will take place in the coming weeks, organized by CBFD.