Las Vegas’ McCarran International Airport, US’ ninth-busiest travel hub, recorded just 70 total arriving and departing international passengers during June, exposing the troubles that the city faces during a protracted and painful recovery from the financial impact of COVID-19. Analysts believe Las Vegas could experience 18 months of diminished revenue figures on both the gaming side and non-gaming areas of the resort business. 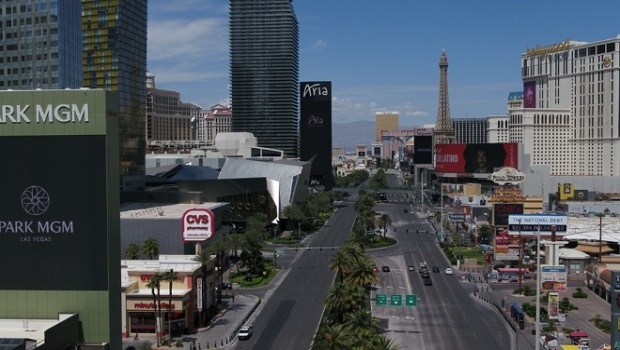 Las Vegas’ McCarran International Airport, the nation’s ninth-busiest travel hub, recorded just 70 total arriving and departing international passengers during June. All of them were coming from, or going to, Las Vegas and Calgary, Alberta, Canada on Calgary-based WestJet Airlines.

Most analysts believe the nation’s largest casino market could experience 18 months of diminished revenue figures on both the gaming side and non-gaming areas of the resort business.

The past few weeks saw cancellations of the Global Gaming Expo and the Consumer Electronics Show, both of them huge conventions that draw large international contingents.

McCarran’s international airline terminal is currently a ghost town. Foreign travel bans and mandatory quarantines, such as the 14-day isolation imposed by Canada on passengers deplaning from flights originating in the U.S., have cost the Strip its international customer base.

International airline passengers accounted for more than 3.8 million of McCarran’s record 51.5 million travelers in 2019. Through June, the airport’s international business is down almost 63%. There is little insight to be had on when that trend might reverse itself.

McCarran saw just more than 1 million total travelers in June, a 76.6% dropoff from the 4.4 million passengers that came through the airport in June 2019.

Strip resorts are also losing out another customer base – domestic visitors attracted by luxury hotel rooms, celebrity entertainment, high-end dining, retail offerings, and large conferences and business meetings. That combined segment contributed more than US$12 billion in non-gaming revenues in fiscal year 2019, more than 60% of the overall revenue total.

For now, much of the non-gaming business is limited or non-existent due to state-mandated coronavirus health and safety protocols and social distancing guidelines. Showrooms and theaters are closed, Las Vegas resorts are limited to 50% capacity in hotels and on the gaming floors, and restaurant and retail offerings have been sharply reduced.

Thinking on the future of the city’s business, Stifel Financial gaming analyst Steve Wieczynski said: “The Strip certainly has the longest of long roads back to normal.”