Two strong defenders of the legalization of casinos held a conversation yesterday through Instagram Live. The Secretary of Tourism of the State of São Paulo and former Minister of the portfolio, Vinícius Lummertz, was invited by the federal deputy for Santa Catarina, Rodrigo Coelho, to talk about possible solutions for Brazil to be able to rise after the pandemic. For them, the moment is ideal for generating jobs and removing that aura that exists contrary to casinos in the country. 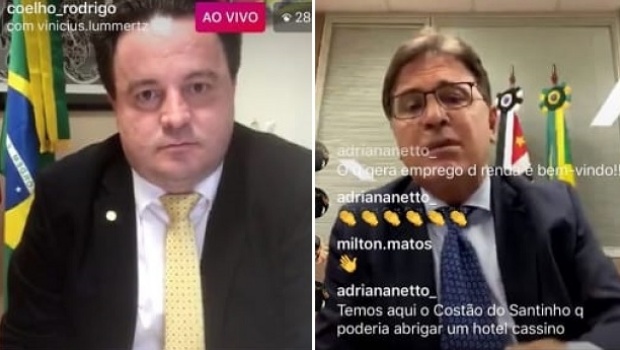 Here are the best concepts of the participants about casinos in Brazil during yesterday’s Live:

“The evangelical bench is very strong and has a position against it. I talked to priests - and today is the day of the priest - and asked if it is a sin or if there is something in the Bible that says gambling has something about not going to Heaven. I was told that there is nothing wrong with that and it was created because of people who spend everything they have on gambling.”

“There is even ludopaths, those addicted to gambling, but it is possible with a registration and the person's CPF or with payment methods such as credit card or not allowing cash payment, to control these people, as happens in several resorts and casinos in the United States, Las Vegas, Singapore and other places, which are fantastic examples.”

“We have a parliamentary front and, speaking with Embratur's president Gilson Machado Neto, I saw that he is excited about this. The moment is ideal, to generate jobs and remove that aura that exists contrary to the casino that it is something wrong or devilish. That's not like that. There is enormous potential. Florianópolis would be ready to receive a casino. Balneário Camboriú, Foz do Iguaçu, Manaus and so many regions. Hard Rock is already in the State and wants to invest.”

VINICIUS LUMMERTZ (Secretary of Tourism of the State of São Paulo)

“There are many infrastructure bottlenecks and in order for PPPs to be made in the tourism area, a number of issues need to be organized, as the return is huge. Santa Catarina has great tourist potential. Casinos are a matter of maturity. We are a country that wants to join the OECD there, you think, in logical terms: it cannot be just an ideological issue. The mayor of Rio de Janeiro "deideologized" and even though he was connected to the church, he realized that we will not have a gambling venue on every corner. It means having a high investment enterprise.”

“The most appropriate model seems to us to be Singapore, where you had seven million tourists and that number jumped to 20 million with just a single large development with theme park, casino and area for congresses and fairs. I went with Beto Carrero to Las Vegas once, because he wanted to find that kind of hotel for Parque Beto Carrero. We need to look for these alternatives to attract investment of this type.”

“The casino and the gaming sector represent 17% of the revenue in Las Vegas. The rest are congresses, fairs, concerts and other activities. I gave a lecture at the biggest tourism event in the East, which takes place in Macau every year. I was invited and stayed in one of the hotels in a complex where one of them represented more than US$ 3 billion in investment. The brother of this businesswoman was also the result of investments of US$ 2 to 3 million.

“In Las Vegas, only in the assembly of a show that has been taking place for ten years, US$ 200 million is invested. All hotels have specific legislation and the purchase of a lot of contemporary art. Wynn has US$ 150 million in exposed art alone. Artists are on display for two or more years. We have so many artists in Brazil and it would be the same here because we have artists for that, as well as for decoration of spaces. Everything is stopped in that area.”

“We cannot be afraid to have hotels in the right place and make concessions. We must be afraid of unemployment, criminality. The fear of the wrong things is precisely caused by the lack of knowledge of how things work in other countries. This delay needs to be overcome with dialogue. The basic structure of sustainable development must take into account economic, social and environmental issues. We have a great opportunity to make changes in Brazil. Crisis creates opportunities because conservatives let their guard down and the moment for dialogue for changes arises.”