“In my management, LOTERJ will fulfill and expand social assistance to those who need it most”

Recently appointed to the presidency of LOTERJ, Army Reserve Colonel Gilberto Gueiros da Silva talked with GMB, in his first interview, about the maintenance and expansion of the company's social actions in Rio de Janeiro. 'We are initiating negotiations so that the necessary resources are contributed and allocated to the social programs currently underway,' he says. According to him, the legalization of the gaming sector in general, as happens in other countries, “will be beneficial for Brazil.” 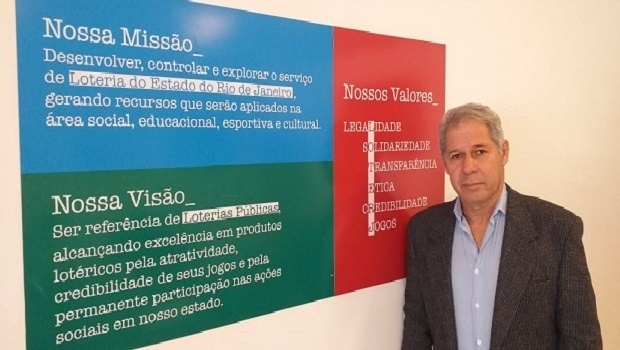 GMB - This is your first interview in your new position as president of LOTERJ. Tell us a little about your career and how you came to this new role.
Gilberto Gueiros da Silva - I am a military officer in the Army with an engineering background. I have been in charge of complex tasks and I imagine that the invitation to take over LOTERJ came from this history. LOTERJ, it is worth mentioning, is a complex task, because managing a public service, with all the rules that public agencies must observe, and, at the same time, competing for the preference of those who wish to bet or have fun betting is not easy.

LOTERJ has always been a vector for economic and social development in the state of Rio de Janeiro. Is your idea to deepen this function, even more in this post-pandemic moment, where more people will need help?
No doubt! Helping people is and always will be the reason for LOTERJ's existence. LOTERJ is a source of non-tax resources, as everyone knows. It lives from sales and therefore also suffered from the pandemic. But it is important to note that this experience has shown even more the change in consumption habits and, as a result, is forcing us to look for new ways to give a quick response regarding the resumption of sales. This means, ultimately, helping to activate the local economy and generate resources to help the poorest people in the state of Rio de Janeiro. LOTERJ has fulfilled this mission for more than 70 years and we are striving to maintain and expand it.

Some media reported that before your appointment, LOTERJ had decided not to renew social project agreements with some institutions. Is that true?
This information is wrong. As I said, the pandemic impacted sales in general, but LOTERJ is still an important vector for social actions in the state of Rio de Janeiro. And, in spite of all the difficulties, we are initiating negotiations so that the necessary resources are contributed and, consequently, destined to the social programs currently underway.

How much did the COVID-19 pandemic affect sales and what are the plans to recover the lottery numbers?
As I mentioned, the pandemic had an impact on sales. Today LOTERJ tickets are sold, predominantly, in street shops. There is a “classic” consumer related to the circulation on the streets. With public policies for the preservation of lives, this circulation was affected and, consequently, sales of this trade in general. LOTERJ is in this context. At the present time, people are returning to circulation and sales are returning. But, anyway, the lessons are being learned and, among them, there is a need to modernize.

In your management, will one of your main projects be to promote an online gaming channel for LOTERJ products? Do you believe that LOTERJ needs to modernize and open other sales channels?
Modernizing is necessary. It is fundamental and it will happen sooner or later. It is about the survival of state lotteries and, therefore, the source of resources that benefit thousands and thousands of people. In this sense, we have that the web is a reality and there is no current sales strategy disregarding it. However, we are dealing with a nearly 100-year-old public service, with public regulations and everything must be considered before we move forward decisively.

Recently, LOTERJ filed a request to be amicus curiae in ABLE's action at the STF. Do you consider that state lotteries are out of date and lag far behind in the competition against Caixa's modalities?
This question is an opportunity to complete the previous answer. LOTERJ is inserted in a “betting market” that, currently, is very competitive, as we compete with: a) the lotteries of the Federal Union, among them the products explored by CEF; b) the draws carried out within the scope of capitalization bonds; c) with the draws on television networks, recently approved; and d) soon with LOTEX and sports betting. So, we have to say that competition with Caixa is just another concern. The focus, going straight to it, is to maintain the ability of state lotteries to compete. We are not afraid of competition, we have lived in it for a long time, but it is not fair to put a sprinter to run 100 meters carrying “a 50 kg cement bag”. ADPFs 492 and 493 discuss our Federation model, the states' self-management capacity and so on - highly relevant constitutional issues, but our Legal Counsel, with the assistance of the State Attorney General of Rio de Janeiro, was very happy to bring to the debate the theme of the modernization of state lotteries as an assumption of the ability to compete and, therefore, to exist.

What is your opinion about the legalization of gambling (casinos, bingos etc.) in general in Brazil?
My personal opinion, which is not to be confused with any institutional position of the State of Rio de Janeiro, is in the sense that they are economic activities and that, once well regulated, as is the case in other countries, will be beneficial for Brazil.