To celebrate the return of the most prestigious European football club tournament, the UEFA Champions League, Betmotion launched two great promotions in Brazil: 'Quem leva a UEFA?' (Who takes UEFA?) and 'Champions20'. Bettors can win prizes such as an official ball, jerseys of the team that obtains the Champions and special bonuses. Both promotions are valid until August 23, the date of the grand European final. 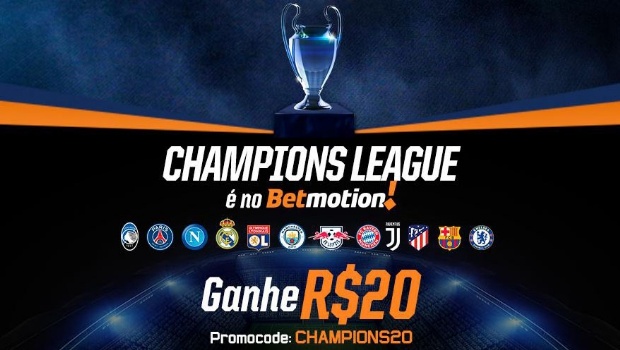 To compete for the first promotion, "Quem leva a UEFA?", published on Grupo Globo's website, and on Esporte Interativo, by Turner (exclusive broadcaster of the Champions in Brazil), bettors only have to register on the landing page and guess which team will win the Champions League, thus competing for an official UEFA ball and a jersey of the one that will get the “big ear” next August 23rd, in Lisbon.

The second Betmotion promotion, "Champions20", is a special bonus of R$20 (US$3.75), offered to anyone who deposits that amount or more using Promocode CHAMPIONS20.

Both promotions are valid until August 23, the date of the grand European final.

Betmotion is one of the main brands in Latin America and offers, in addition to sports betting at major events in the world, international awarded products, such as Bingo and Slots.

The site also has more than 35 integrated game providers and a unique variety of payment methods. With Salsa Technology as a Provider, Betmotion is present in several countries, with a strong presence in Latin America and Europe.