The centenary of Brazilian participation in the Olympic Games will be celebrated on 400 thousand Federal Lottery tickets. The initiative of Caixa and the Brazilian Olympic Committee (COB) is scheduled was launched this Wednesday (5). From September until the end of the year, a different model will be distributed each month, with the campaign logo and illustrations that honor the hundred years of Olympic participation. 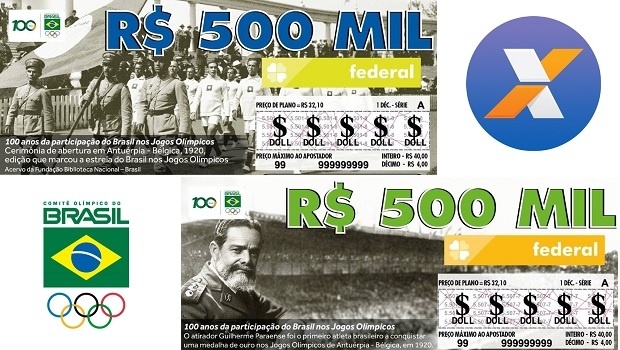 The first ticket in the series will bring the parade of the Brazilian delegation to the opening ceremony of the Antwerp Games, in Belgium, in 1920. At that time, 21 athletes, all men, represented the country.

In the second, the main personality will be the sniper Guilherme Paraense, the first Brazilian to win a gold medal at the event, on August 3, 1920. The country had three medals in that edition, all in the shot (silver with Afrânio da Costa and bronze by teams).

"It is a way of promoting the Olympic memory, the trajectory of Brazilian sport and our great athletes, as well as inspiring future generations," says Manoela Penna, COB's director of communication and marketing. The committee has most of its funds from federal lotteries. By law, the entity receives 1.71% of the total collected. The amounts are transferred directly by Caixa and applied in the preparation of Brazilian athletes, mainly for the Olympic Games.

At the beginning of the pandemic, a drop in this transfer worried the COB, which at the end of last year projected to receive R$ 312 million (US$59m) in funds from the lotteries (97% of its total budget for the year) in 2020. As of May, however, the collection increased again, reaching R$27 million (US$5.1m) in June.

Since 2001, with the enactment of the Agnelo / Piva Law that provided for the transfer of lotteries to the sports area among others, Brazilian sport started to have a source of revenue that made it change its level internationally.

The calculations that define the distribution percentages have changed over the years, and the current division was established at the end of the Michel Temer government, in 2018. From 1920 to 2000, the country won 66 medals in 18 participations. In the four editions after the law came into force, that number reached 62 medals.