Visit of Pernambuco clubs to the President

Officials from Pernambuco clubs Santa Cruz and Náutico met on Wednesday (9) in Brasília with the President of the Republic, Jair Bolsonaro, to discuss the approval of Provisional Measure (PM) 984, dispatched in June this year, but still without being promulgated as law. Bookmaker estadium.bet is master sponsor of both football teams and expressed to GMB their pride in seeing the President of Brazil pose with the shirts that bear the company logo. 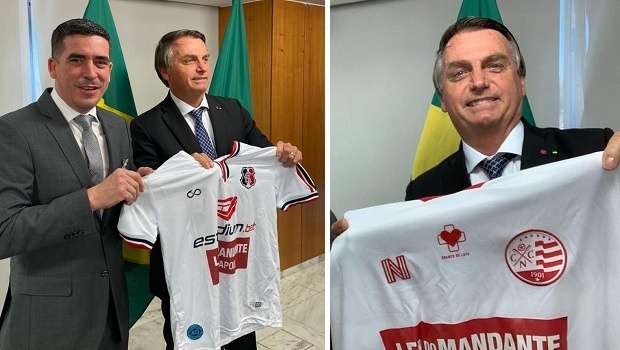 Estadium.bet is the master sponsor of Santa Cruz since the end of 2019 and also prints its brand in main space of Nautico’s uniform since last month and until the end of December 2021. In addition to the partnerships with the clubs, the site sponsors the entire Pernambuco championship with the presence of the brand, exclusively for a betting site, in all the properties of the tournament (boards, carpets, etc.).

“We work hard to win over the Brazilian gambler and we do it with investment and support for local football in all its categories. From the beginning, we have taken Pernambuco as a key place because of fan’s passion there and seeing President Jair Bolsonaro today posing with the shirts of the clubs we sponsor fills us with pride and satisfaction,” said with great emotion Claudinei Bettioli, commercial director of the company, to GMB.

The PM is based on changing the rule involving the broadcast rights of matches. Currently, the agreement involves the two teams in the dispute, but the idea is that in the future the one that plays at home have the exclusive right, without the need for the visitor’s approval.

"It was a very good meeting. We came to corroborate the agreement of the Northeastern clubs with the PM. We want a greater condition in the distribution of revenues involving broadcasting rights. We also discussed the need for greater protection in relation to the training of the athlete, not leaving the clubs so vulnerable," said the president of Santa Cruz, Constantino Júnior.

Also according to the representative, the next step is to establish a dialogue with the Chamber of Deputies, chaired by Rodrigo Maia (DEM-RJ), to obtain approval. "We have to act with the deputies to transform the PM into law. We will soon make a disclosure through our official channels, with campaigns to strengthen the need to change the model of broadcasting rights," he stressed.

In addition to the Santa Cruz representative, the president of Náutico, Edno Melo, and other club leaders from the northeast also participated in the meeting with the president of the Republic. It is worth remembering that, recently, the teams from the region made a joint letter from the Liga do Nordeste demonstrating support for the approval of Provisional Measure 984.

Published on June 18, PM 984 changes two provisions of Laws 9.615 / 98 (Lei Pelé) and 10.671 / 03 (which provides for the Supporter's Statute). The Measure changes the ownership of the arena right, which today is divided between the two clubs involved in the match. The proposal is that it be granted exclusively to the one that plays at home.

If approved, it will also generate changes regarding the payment of arena rights to athletes, it will change the minimum term of employment contracts of professional players and, in addition, it will allow television stations to sponsor and display brands in club uniforms, something banned since 2003.