Gaming development in Brazil and LatAm, key topic of the day at SBC Summit Barcelona

Latin America is always an interesting region, with Brazil now working on its regulatory framework. In different panels of SBC Summit Barcelona, Witoldo Hendrich (Online IPS Brasil) and Alessandro Fried (BtoBet) agreed on that high taxation can turn the market less competitive as hoped. JD Duarte (Betcris) highlighted that Mexico and Panama proximity to the USA generates appetite for NBA and MLB. Alessandro Valente (Super Afiliados) described integration of QR codes into TV ads as an example of innovation driven by local factors. 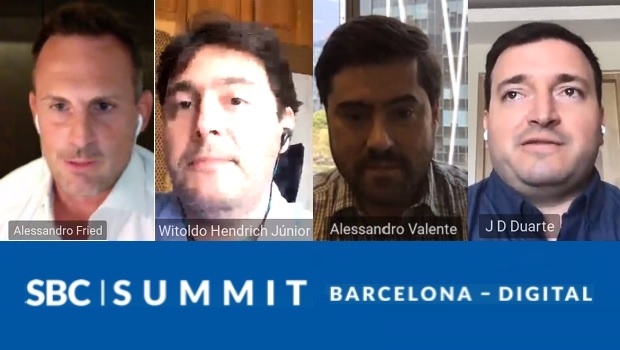 Considering himself as an ‘optimist’, Witoldo Hendrich Jùnior, Founding Partner of Brazilian law firm Hendrich Advogados, stated that “gambling has finally been placed on the ‘Agenda Brasil’ – becoming a key economic mandate for congress to deliver on.”

Hendrich pointed to last month’s confirmation by the Brazilian government that social development bank BNDES would spearhead the development of the market’s legislative and regulatory frameworks.

"What BNDES is going to do is show to the government what is the best environment, the best rules, practices, what needs to be changed and how activities can be regulated to make sure Brazil has a safe gambling marketplace for the future”, said Hendrich Jr.

However, despite his positive tone, Hendrich underlined that Brazil is still very much in phase one of its regulatory process. Furthermore, any BNDES recommendations will be put to the government and congress to pass into law.

Colombia is the poster child of Latin American iGaming and Fernanda Sainz of Caliente Interactive highlighted the need for Mexico to go down a similar path. As is often the case though, the industry needs to be more proactive in educating regulators and governments as to the potential of regulated gambling.

When looking to enter the Latin American market, a localized approach is key, with JD Duarte of Betcris highlighting the major differences across the region. The close proximity of both Mexico and Panama to the United States sees a greater appetite for NBA and MLB there, whereas colloquialisms vary from country-to-country, meaning local knowledge is key to success. One example of this is betting terminology, with a Parlay Bet changing name across the region.

The difference in culture was also stressed, with online banking and payments a foreign concept to many in the region. BtoBet’s Alessandro Fried detailed their recent integration inside the popular Rappi App, which has nine million users in Colombia alone, citing this as the type of innovation that’s needed to get over cultural hurdles in these emerging markets.

Meanwhile, Alessandro Valente of Super Afiliados highlighted the integration of QR codes into TV advertising as another example of innovation driven by local factors.

Tomás García Botta, Partner of MF Estudio, explained that the Province of Buenos Aires, passed their legislation in January 2019 and, unlike Brazil, it held a tender which had 14 applicants that filed business proposals, competing for seven licences to be awarded by the authorities.

“Meanwhile, The City of Buenos Aires on the other hand has taken a different approach, placing much lower financial requirements. It is reported that five companies have filed for applications,” Garcia Botta said.

Congress standstill had left the market operating in a grey zone, where the Peruvian market has seen a new online sportsbook launched every month – subsequently targeting consumers quite aggressively.

Following blunt assessments of Argentina and Peru, the panel turned to LatAm’s shining light Colombia, where Rodrigo Afanador, CEO of Zamba.co, believes the market maturity will see Colombian sports betting enter the next stage of its development.

Against the scepticism of other LatAm markets, Afanador stated that the Colombian government and regulatory agency ColJuegos ‘from the start always took the duties of regulating sports betting seriously.’