Estadium.bet becomes new Master sponsor of Avaí for the season

On its 97th birthday, another great gift for the fans of this club from Florianopolis: betting firm estadium.bet becomes the new jersey Master sponsor of Avaí until the end of the season. The debut of the new partner in the main space of the shirt will be in the match of this Wednesday (2), at 16h30min, at Ressacada stadium against Operário-PR, in a game of the 7th round of the Brazilian Series B. The bookmaker thus adds its 12th team sponsored in Brazilian football. 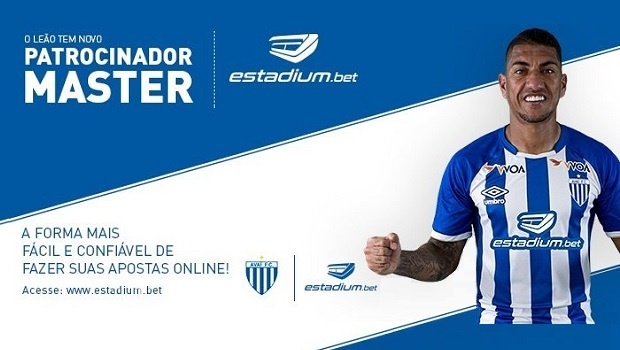 The signing of the Master sponsorship was an old wish of the club's management and now realized. Estadium.bet is a safe and fast sports betting company, which provides the customer with a protected and guaranteed environment of their data, so that the bettor can make the deposits and payments of their bets.

At estadium.bet, the user will be able to find different sports betting opportunities daily in the most varied sports segments. The application and website have a huge portfolio in the field of sports betting around the world:

• Football: Major tournaments around the world such as the Brazilian Championship, Libertadores, Champions League, Premier League and Spanish Championship.

• Volleyball: For fans of Brazilian sport, three times Olympic champion, the main tournaments such as the World League, the Grand Prix and the Superliga (Brazilian Volleyball Championship).

• Futsal: For football lovers, the National Futsal League and the Regional Championships.

• Ice hockey: For fans of the most famous sport in Canada, betting on the main league, the NHL.

• Tennis: Indispensable for those who love the most important tournaments such as Australian Open, Roland Garros, Wimbledon and the US Open.

• Snooker: For lovers of strokes, bets on the most varied championships such as the Shanghai Masters, the World Open and the British Snooker Championship.

• MMA: The best matches in major championships like the UFC and Bellator.

Estadium.bet is one of the companies that has invested the most in Brazil’s football. In addition to the state tournaments in Sergipe, Alagoas and Pernambuco, the company also supports, with master sponsorship, twelve teams: Botafogo-PB, Santa Cruz, Decision, Vila Nova, Ceará, Salgueiro, Paraná Clube, Criciúma, Náutico, Remo, CRB and , now, Avaí.

In addition, estadium.bet has become the exclusive bookmaker to advertise on the pitch ad boards in all Serie C matches of the Brasileirão.

Another of the great recent actions of estadium.bet in favor of clubs and the Brazilian public was the “Estadium de Prémios” (www.estadiumdepremios.com.br), a website where fans of clubs sponsored by the company can buy a capitalization bond, contribute to NGOs, helping their heart team and even win motorcycles, official shirts and money.

The platform has a selection of sports and live betting that offers fans a multitude of leagues and championships around the world. Brazilian Championship, Bundesliga and Premier League are part of the menu, as well as NBA, NFL, NHL and many other events.