In Manaus, Bolsonaro' sons talk about casino and Amazon integration

The event that marked the resumption of tourist activity in Amazonas that took place last Friday (18), was attended by Senator Flávio Bolsonaro and Federal Deputy Eduardo Bolsonaro. In their speeches, two of the sons of the President of the Republic spoke of the interest of international players in investing in resorts with casinos in the state, and also about the actions of the federal government to integrate the nation. 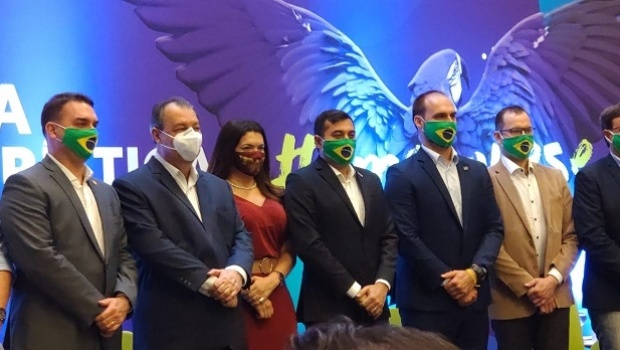 Senator Flávio Bolsonaro thanked God for the beauty of the Amazon and said that nature tourism is global greed and attracts investors, including those from casinos.

"What we heard in Las Vegas is that there is great interest of these major players in tourism to invest heavily in this area in states like São Paulo, Rio de Janeiro and Amazonas," said Flávio, at the Vasco Vasques Convention Center.

"The dream of many of them is to come to here to Manaus or close to here, because nature tourism is one of the things that most encourage international tourism," he added.

Flávio Bolsonaro also recalled that Congress should start discussing Bill 4.495/2020, presented by Senator Irajá (PSD-TO) that allows the implantation of resorts with casinos - the so-called integrated resorts. The parliamentarian states that this initiative can help expand tourism in the country.

The motto of Eduardo Bolsonaro's speech was “to preserve is not to isolate.” The parliamentarian highlighted, for example, the recovery of BR-319 by the federal government and said that it does not make sense to move the Amazon away from the rest of the country. Preserving is not isolating. The Bolsonaro government wants to integrate the nation,” he stated.

Invited to the event, Senator Omar Aziz stated that the presence of Bolsonaro’ sons in Manaus is necessary for dialogue with the federal government. "The presence of Flávio and Eduardo is a dialogue that we need with the President of the Republic to preserve the achievements that we have," he said.