Panel of experts at SiGMA LatAm

Brazilian clubs need to learn what to offer to sponsoring bookmakers

On the second day of SiGMA Americas Digital, sports betting houses were at the center of the event, in the panel 'Effects of sports betting brands on Brazilian football.” Angelo Alberoni (Betmotion), Arthur Silva (Coingaming.io) and Hugo Baungartner (RCT Gaming) addressed the theme, which was mediated by Matheus Antunes (Volta Pra Marca). Everyone's opinion is that Brazil has a lot to grow in the segment and clubs need to learn to offer the best to their sponsors. 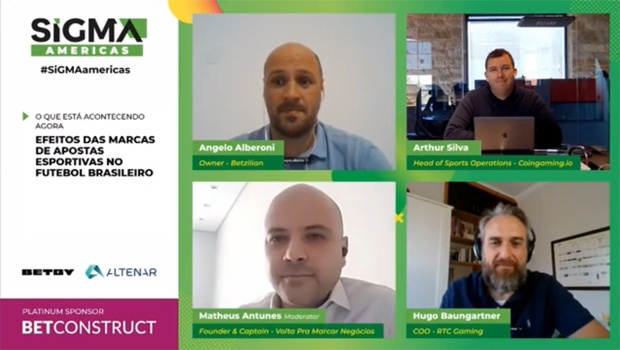 Arthur Silva spoke about Sportsbet.io's sponsorship of Flamengo and how interesting the experience has been for the company and the club. “It is the first and only sponsorship in Latin America and I would like everyone to be like that. I believe that Flamengo is doing a great job not only in the field, but also in the area of ​​marketing and partnerships,” he said.

According to him, the company has made a very good mix, balancing actions on digital and open TV. “I would say that this is the leadership of our campaign. We are very connected to the team's brand and we realize that Flamengo impacts more outside Rio de Janeiro than in its state,” he said.

“Less than half of our customer base at Sportsbet.io who arrived because of Flamengo is from Rio; that is, the club is spread across the country and it was a surprise to learn that from our sponsorship," Silva added. According to him, the company achieved success in sponsoring the proactive approach by Flamengo, "who is our partner and contributes to the promotion of our brand."

Silva said that teams still see betting companies as a jackpot, due to some millionaire deals. "Is not it. The market has been improving every year. In the case of Flamengo, even before the jersey, we had a digital partnership, which was also based on performance, developing a relationship with the partner, and growing with it,” he commented.

The executive gave an example on the question of the type of delivery that a club can offer. “We had a contract with a club that provided for all types of delivery, as well as digital, social media and conversion. So, we decided to start an email campaign to communicate the partnership to fans. The club said it did not have an email list. That is, they did not have an adequate marketing department. They just wanted us to show the results,” he said, noting that Brazil is changing, with an increasing digital presence. "For sports betting, you need to involve your audience and be engaged in all social networks and via email or app campaigns," he explained.

According to him, “it is not enough to sign with the biggest club, but the one with the best engagement. Jersey sponsorship plays an important role, but online activation is essential.”

Angelo Alberoni said that sponsorship in Brazil with sports betting is a recent business and Flamengo is a unique case. “It is important to achieve synergy with the fans. Clubs are preparing to receive a new type of sponsorship. This is the most important problem in Brazil today. After regulation, sponsorship levels will reach an appropriate level, but clubs need to learn what to offer their partners.”

Hugo Baungartner talked about the old law that determined bingo clubs to sponsor sports associations. “As suppliers at the time, we were not required to carry out this type of sponsorship. We helped a football team that reached the first division of the São Paulo state championship. Unfortunately, gambling was banned in Brazil, but we leave that teaching behind,” he commented, noting that small teams need sponsorships a lot. “And it will be very important that these supports arrive. I think it is possible for betting companies to become not only sponsors, but also investors in teams, when the activity is regulated.”

Matheus commented that the issue of the sale of TV rights for the Brasileirão tournament is important, which could place the championship globally. “This will allow taking national brands to a greater presence abroad. We have to see, then, how the clubs will be able to prepare to deliver more to the brands,” he attested.

Alberoni said that in the last 20 or 30 years Brazil has had a unique model of football broadcasts. “This has been changing and this year we are seeing something important. But I think that not all clubs in Brazil are prepared for this new moment. We are in the initial phase and it is incomparable with examples from Europe. Sponsorship activation is nothing. It is important to put the brand on the jersey, but involvement with the fan base is essential and Brazilian clubs are not yet prepared to achieve that base,” he said.

Matheus concluded by saying that “we have a lot to learn from Europe. Brands are coming and we need to help them, as well as companies.”