In an article published in Esporte Espetacular on TV Globo and also on its GE website, it was a supposed match-fixing of Series A3 games, in the Paulista 2 x 3 Olímpia match (12th round, played on September 19) and Barretos 0 x 4 Linense (9/18). The suspicions about these games increased with reports produced by the company Sportradar, a partner of the São Paulo Football Federation (FPF), which monitors betting sites and identifies possible frauds in football games. 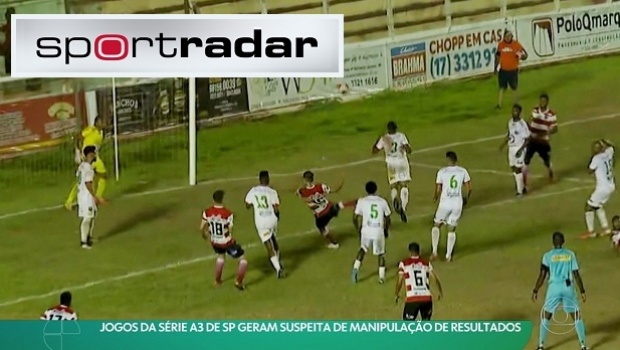 The matches are under investigation by Drade (Police Department for the Suppression of Sports Intolerance Crimes). According to the article, the reports of both games point out: "There is clear and notorious evidence observed in the betting markets indicating that the course or outcome of this match was unduly influenced in order to obtain illicit profits from sports betting."

Suspicions about this game, as well as Barretos 0 x 4 Linense, increased with reports produced by the company Sportradar, a partner of the São Paulo Football Federation, which monitors betting sites and identifies unusual patterns, generally related to fraud in football matches.

According to the document demonstrated by GE, bettors had the information that Barretos would be defeated by at least four goals - the game ended 4-0 for Linense. In Paulista and Olímpia game the fraud was more complex: Paulista would win the first half (went to the interval with partial victory of 2 to 1), but would lose the match (Olímpia turned in the second stage to 3 to 2).

The monitoring of Sportradar is more complete with respect to the game Galo versus Olímpia in Jayme Cintra. The company reports that bets totaling 19,102 thousand euros (approximately R$ 123 thousand) were made in this game. Against logic, as the company describes, 62% of all this amount was bet on the option in which Paulista would win the first half, and Olímpia the second.

The company monitored 93 bets, which amounted to 10,800 euros (almost R$ 70,000), all of which spiked the victory of the Jundiaí team in the first half - none at Olímpia. Among the identified bettors, at least one had already been marked by the company for irregular bets.

“Finally, no pre-match sporting factor can influence bettors on any of these specific results, since any regular sporting factor would impact both the first half and the full game result in a similar way, and could never suggest that Paulista FC would win only the first half, while Olímpia FC ended up winning the match. Overall, it is quite clear that bettors had prior knowledge of the final result in both the first half and the match, and took advantage of several betting markets to maximize profits from illicit betting,” concludes the report.

On September 20, the Esporte Jundiaí newspaper monitored three sports betting sites, because on social media this game was still in the afternoon of that day, while the ball rolled in Jayme Cintra was considered as a suspect. Of all the sites, Bet365 had removed the game from its list, most likely due to the strange movement that occurred for betting on the game, when it was 2 to 1 for Paulista and was in their interval. On other sites, the game continued.

The Civil Police launched separate investigations to collect more information of each of the matches. The São Paulo TJD (Court of Sports Justice) also initiated an internal procedure for eventual sports punishments. The Federation monitors the cases through its Integrity Commission.

On Friday afternoon (25), the case revealed firsthand by Rádio Difusora 810 AM in Jundiaí and later echoed by Esporte Jundiai, that a Paulista player was enticed to deliver the result of the match of Tricolor against Desportivo Brasil. But the athlete from Galo recorded all conversations - be it through audio or messaging applications.

He drew up a police report in the 4th Police District of Jundiaí late Friday morning (25) communicating about the fact, and ended up not disputing the match. The game ended with a 3-2 victory for Paulista, in Porto Feliz, and this confrontation is not on the list of suspicions, as none until the moment of the 13th round.